One of Rioja's Greatest Rarities & Recollections of a Memorable RWC Dinner 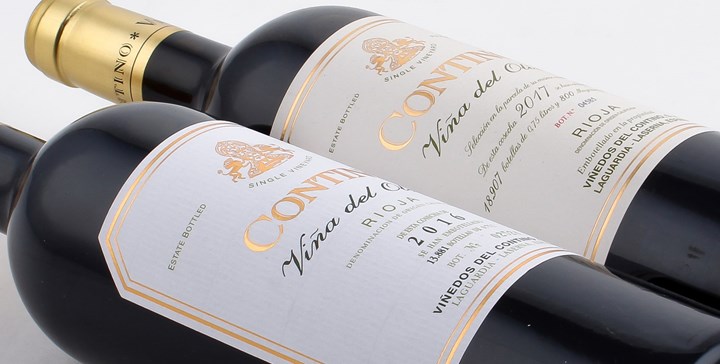 Family owned since 1879, CUNE occupies our short list of Rioja's greatest traditional producers. Yet, over its long history, it’s also been one of the region’s visionaries.

We can think of no better example of CUNE’s pioneering spirit than their creation, in 1973, of the great single-vineyard Rioja, Contino. Looking back over the space of 46 years, it’s astonishing to consider that Contino was Rioja’s very first single-estate winery.

But Contino’s greatest wine is surely Viña del Olivo, a selection of the best fruit within this exceptional terroir’s top site, a tiny plot littered with limestone pebbles surrounding an ancient olive tree in the heart of the estate’s sheltered bowl.

Made only in fine vintages, it is the ultimate expression of the Contino terroir, the parcel where the estate’s powerful ripeness, allied to chalky minerality, is voiced with the greatest depth and nuance.

Viña del Olivo is planted to Contino’s signature blend of 90% Tempranillo—Alavesa’s hallmark variety for the richness that it expresses there—and 10% Graciano. The wine is given a cool 10-day vinification in 1000 hl oak vats, followed by malolactic fermentation in new French barrique and 18 months aging in a mix of French, American and Hungarian barrels.

As with the other Contino reds, fermentation and aging are short to capture Viña del Olivo’s great natural ripeness, setting the stage for its marvelous development in bottle. As Gutiérrez notes, Viña del Olivo “has a lot of power, in both fruit and tannic structure, so needs time to integrate.”

Viña del Olivo's capacity for aging was fully demonstrated in October, 2019, when The Rare Wine Co. hosted a unprecedented dinner at Alta in New York City. CUNE's Victor Urrutia not only blessed us with his presence, he provided very rare older vintages of Olivo.

We were in the presence of greatness that night. The oldest Olivo vintage, 1996, reaffirmed what Luis Gutiérrez has written, calling it “a superlative wine, round and harmonious … well structured and savory … extremely long, full and complex.”

Perhaps even greater was the penultimate wine in the tasting, the legendary 2001. This was the vintage that pioneering American writer on Spanish wine, Gerry Dawes, once called “undoubtedly the greatest red wine I have tasted in the so-called modern era of Spanish winemaking.”

CUNE releases Viña del Olivo early in its third year, as its collectors are eager get it in their cellars, to allow it to begin its long evolution. Such an early release is unusual for a Rioja of its stature, but the wine quickly disappears from the market, especially in Spain. As Gutiérrez notes, each new release "sells like hot cakes."

Among Rioja connoisseurs Contino is, today, a firmly established icon. All of its wines are hard to find in the United States, but it's especially so with Viña del Olivo. Fortunately, The Rare Wine Co. has direct access to all the Contino wines, including Olivo, and can offer not only the current release but also older vintages from our library.