Few Barolo vineyards have either the history or the prestige of Castiglione Falletto’s Monprivato. Named in local land registries as early as 1666, it was, in 1985, on Renato Ratti’s short list of the eleven greatest historic vineyards of Barolo.

Its attributes as a Barolo vineyard are unmistakable: six hectares of prime southwest-facing hillsides at 280 meters above sea level, in the heart of the Barolo region. The soil is a silty, clay bluegray marl packed with a high content of active limestone. As in Burgundy, this limestone contributes to the wine’s subtle perfume and minerality, as well as its fine tannins, lingering-aftertaste and remarkable longevity.

For a few decades in the twentieth century, ownership of Monprivato was divided, but it has now been reunited as a monopole of Mauro and his children. The relationship between the Mascarello family and Monprivato dates back to 1904, when Mauro’s grandfather Maurizio bought the vineyard and its house. From that year until 1920, Maurizio made a pure Barolo from Monprivato, though, as was normal for the time, it bore the name “Barolo” only. Sadly, no bottles are known to exist of that wine.

For fifty years, between 1920 and 1970, no single-vineyard Barolos were made from Monprivato by the Mascarellos. But having taken over the winemaking from his father in 1967, Mauro Mascarello believed that pure Barolo from Monprivato was the future. And in 1970, he decided to make a Monprivato cru Barolo, despite the fact that his father Giuseppe (“Gepin”) insisted that fine Barolo could be made only through a blend of vineyards.

To demonstrate the wisdom of his idea, Mauro chose the vineyard’s best vines: a section of Nebbiolo Michét (a now-rare subvariety) planted by his grandfather in the early 1920s. Because of the quality and concentration of its fruit, Michét is widely viewed as superior to the far more common Nebbiolo Lampia. But due to its small yields, little of it remains today in Barolo. The Mascarellos have stood nearly alone in their devotion to Michét, a tradition established by Maurizio in the 1920s and continued by Gepin, who used Maurizio’s Michét for all his selection massale cuttings in the 1950s and 1960s.

Made purely with Michét as it was, Mauro’s 1970 Barolo Monprivato turned out to be one of the great Barolos of our time. For Mauro and his father, it put to rest the question of whether Monprivato was deserving of its own Barolo. And it planted the seed for an important later project for Mauro: the great Barolo Riserva “Cà d’Morissio.” Inspired by the 1970 Barolo Monprivato, in 1983 Mauro decided to replant a large part of the vineyard to Michét. To this end, he started following nearly 4000 Michét vines in Monprivato that his father had planted in the late 1950s and early 1960s. These vines all came from cuttings from Maurzio’s 1920s planting.

After four vintages of careful observation, in March, 1987, Mauro picked the buds from the 283 vines that had provided the best results. He grafted these buds onto un-vigorous rootstock and planted them in a nursery specially prepared for their reproduction. Meanwhile, Mauro identified slightly more than one hectare of Monprivato (indicated on the map by the lower left red dot) to replant.

The preparation of the soil in Monprivato required major work: restoring the soil, protecting it from erosion and restoring the contours of the land to how it had been in the past. And in the spring of 1988, the Michét vines were planted at density of 5680 vines per hectare. 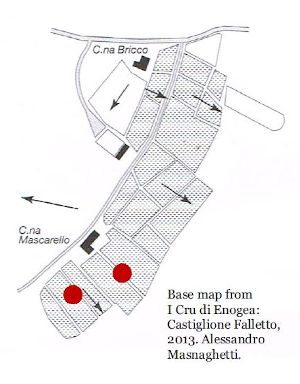 By the 1993 vintage, Mauro believed that grapes produced by the Michét vines, now in their third year of production, were ready to produce the first vintage of a new Barolo Riserva dedicated to his grandfather Maurizio. The entire production of the vines went into a single 27-hectoliter Slavonian oak cask. After three years, Mauro took out three-quarters of the wine to go into the 1993 Monprivato. He transferred the remaining six hectoliters to a somewhat smaller barrel for further aging, until he decided to bottle it in 1999 as 1993 Barolo Riserva Cà d’Morissio.

But in the meantime, Mauro wasn’t finished optimizing the Monprivato vineyard for coming generations. In the early ‘90s, he repeated the work he had done between 1983 and 1988 for another 1.5 hectares of Monprivato, indicated in the map above with the second red dot. That process was completed in the spring of 1996, when approximately 9000 additional Michét vines were planted, each a descendent of the vines planted by Mauro’s grandfather in the 1920s.

Today, 2.5 hectares of Monprivato have been replanted to Mauro’s grandfather’s Michét, making this one of the greatest commitments any Barolo family has made both to the future, while honoring the past.

A dinner of seven vintages of Giuseppe Mascarello Barolos and Barbarescos going back to 1958. PRODUCER

Mauro Mascarello is the last remaining giant of the great postwar Barolo winemakers.