A Feast of Grand Crus 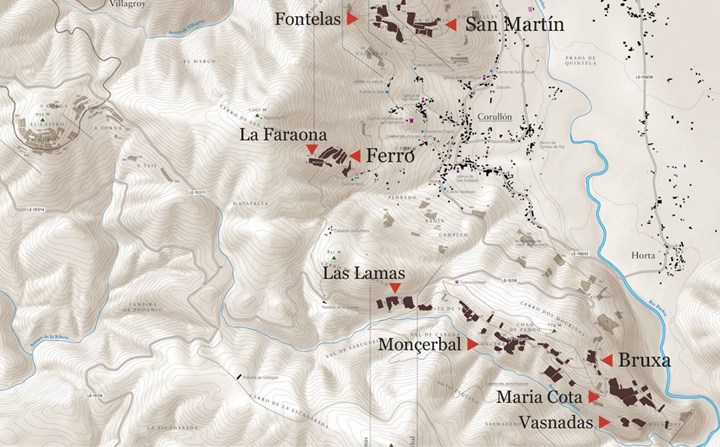 Imagine if the Domaine de la Romanée Conti's grand cru holdings in Vosne-Romanée weren't limited to the village's four crown jewels: Romanée Conti, La Tache, Romanée-St. Vivant and Richebourg. Make believe for a second that it also owned some or all of Vosne-Romanée’s two other grand crus, La Romanée and La Grand Rue.

Also imagine that, in addition to its iconic single-vineyard bottlings, DRC offered a single wine that was a blend of all of these grand crus, as the ultimate expression of the Côtes de Nuits’ pre-eminent terroir.

Of course, that will never happen. But something very close is occurring in Spain’s ancient Bierzo region—in the village that towers above others in the same way Vosne-Romanée does in the Côtes de Nuits. That village is Corullón. And a quarter century ago, a single domaine, Descendientes de José Palacios, came to control the town's grand cru vineyards in a way that not even DRC does in Vosne-Romanée.

Spanish wine aficionados are probably most familiar with Descendientes' three iconic single-vineyard bottlings from Corullón: La Faraona, Las Lamas and Monçerbal. But batting clean-up in the order is an even more fascinating wine, Villa de Corullón.

A blend of all of the village's grand crus, it is the ultimate expression of Corullón’s terroir. The wine’s story dates back to 1999 when Alvaro Palacios and Ricardo Pérez began buying up the greatest vineyards—all a century or more old—around the village of Corullón, Bierzo’s greatest terroir (the equivalent of Vosne-Romanée in Burgundy). The vineyards can be seen in the map above.

In that first vintage, 1999, all of their grand cru fruit went into Villa de Corullón. The wine was predictably glorious. But in 2001, Alvaro and Ricardo decided to produce individual bottlings from five of the greatest vineyards: La Faraona, Las Lamas, Monçerbal, Fontelas and San Martín. Only part of the production was used; the rest was reserved for Villa de Corullón, insuring that it would remain not only a brilliant wine, but an all-encompassing expression of the village’s great terroirs.

From 2001 until 2006, all five grand cru bottlings were made. But in 2007, Alvaro and Ricardo decided—at least for the export market—to only bottle La Faraona, Las Lamas and Monçerbal on their own. This allowed most of the production of Fontelas—and all of the output of San Martín—to go into Villa de Corullón, along with a big part of Monçerbal, and lesser amounts of Las Lamas.

But those five vineyards are not the end of what Alvaro and Ricardo had managed to buy in Corullón. They also own the prime sites of Ferro, Maria Cota, Vasnadas and Bruxa—each of which graces the Villa de Corullón blend.

A Glittering Mosaic
According to Luis Gutiérrez, Descendientes stands apart from every other estate in Bierzo "because their very old vineyards are located in the village of Corullón, high up in the mountains, some of them at 1,200 meters altitude on slate slopes where they yield minuscule quantities of grapes.”

One glance at the map above shows just how extraordinarily extensive and diverse its holdings are. North of the village lies the early ripening, southwest-facing San Martín, whose rich fruit, full body and firm tannins typically make up 20-25% of the Villa de Corullón assemblage.

Yet, the nearby Fontelas’ more shaded exposure, and greater proportion of slate makes for a more subtly nuanced, structured expression. And Ferro, positioned just below La Faraona but with more clay in its soil, yields a highly complex and savory wine from a harvest that typically lags San Martín by six weeks.

Particularly impressive are the Descendientes vineyards in the Monçerbal paraje—the Spanish term for a recognized zone, analogous to the French term lieu-dit (“named place”). Monçerbal is a band of hillside vineyards south of Corullón reminiscent of Burgundy’s Côte d’Or.

And, as in the Côte d’Or, even adjacent Monçerbal parcels can produce subtly different expressions of the vineyard's dark-fruited, mineral character. Vasnada lies at Monçerbal’s eastern tip and shares much of its character. Meanwhile, the tiny yields from the century-old vines in the east-facing, limestone-laced Maria Cota and Bruxa lend power and bracing acidity.

In 2019, more than half of the Villa de Corullón blend came from Monçerbal and San Martín. In Ricardo Peréz’s opinion, it’s the tension between these contrasting terroirs that forms the wine’s essential character. It's no wonder the 2019 earned a 96-point rating from Luis Gutiérrez.

Heirlooms in the Vineyards
Since the vineyards are all 100+ years old, it’s not surprising that Alvaro and Ricardo found other  native grapes mixed in.  Bierzo’s signature variety, Mencía of course dominates the blend. But it is complemented by small amounts of other red grapes that were planted a century ago in the same vineyards. They help give Villa de Corullón its fantastic complexity.

Corullón’s vineyards also contain equally ancient white grape vines, including Palomino, Malvasia, Chasselas and Godello, which are co-fermented with the reds. As with the terroirs, Alvaro and Ricardo’s skill, informed by twenty harvests, in marrying the diverse aromatics, textures and structures of these varieties contributes greatly to Villa de Corullón’s great depth and complexity. A typical vintage of Villa de Corullón is 5 to 9 percent white grapes.

As Gutiérrez says, Alvaro and Ricardo “carry out very detailed work, both in the vineyards and in the winery, and the result shows. The wines have the purity and clean rusticity of the Cornas from Clape, and if you push me, I’d also say they also have a similar texture.” Gutiérrez goes on to call the entire Descendientes project "The most serious wine project in Spain. Period."

Villa de Corullón is a seamlessly harmonious, highly nuanced and elegantly textured Bierzo red that is stunningly close in quality to the single-vineyard cuvées, as evidenced by its 96-point Gutiérrez rating for the 2019 vintage.

Yet, while you could spend $1000 for a bottle of La Faraona, and in the three-digits for Monçerbal or Las Lamas—if you could find these micro-production wines—a bottle of 2018 Villa de Corullón will set you back just $44.95. Given what’s goes into each bottle, it’s a monumental bargain.