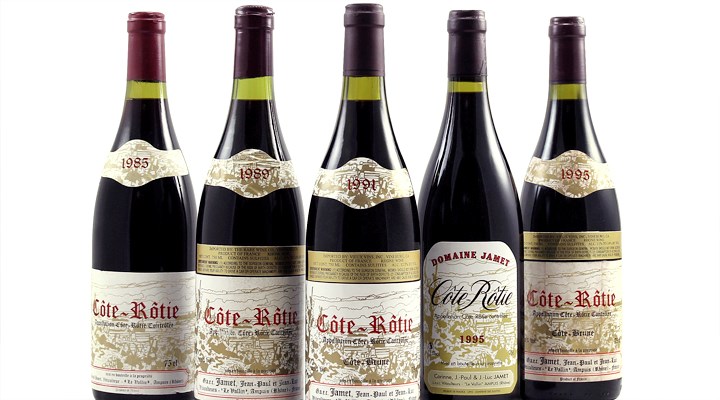 Our 2013 Early Greats of Côte Rôtie & Cornas series at Bar Boulud continued on April 17, with a look at Joseph Jamet, whose domaine has been a beacon for traditional winemaking in Côte Rôtie for more than six decades.

Jamet began his career in 1950, with the acquisition of .35 hectare in Côte Brune. But for the first quarter century he was content to sell his wine to negociants for blending under their names. It was not until the 1976 vintage that the first Domaine Jamet wine appeared.

Fortunately for Jamet, he didn’t suffer the fate of Noël Verset, Marius Gentaz, Albert Dervieux, or Raymond Trollat: having no heir to take over. He had two sons, Jean-Paul and Jean-Luc, and they joined him during the 1980s, as the Jamet name was becoming widely respected among lovers of classic Côte Rôtie.

A defining characteristic of the domaine’s wine then—and now—is that it has always been a single cuvée, skillfully blended from lieux dits throughout Côte Rôtie. To this day, despite owning parcels in 27 of the most prestigious climats of Côte Rôtie, the Jamets have resisted the temptation to produce single crus, believing that the whole is greater than the sum of the parts.

Joseph Jamet’s winemaking was classic, and while his sons use a bit more new wood, little has changed. Today, the elevage is long—more than 20 months—in a mix of 225L and 500L barrels, of which about 20% are new each year.

Of course there is one outlying wine from the Jamet stable: the ultra rare Côte Rôtie Côte Brune. Jean-Paul and Jean-Luc took over from their father in the early 1990s, but he kept his hand in the game, producing a tiny amount of Côte Brune each year. Still made, and released in minute quantities, it comes from a mere .5 hectare of vines, including the original .35 hectare Joseph started with in 1950.

We’re not sure the first vintage of Côte Brune; the earliest to pass through our hands was 1985. For decades this wine wasn’t directly imported into the United States, and even in Europe the existence of a second Côte Rôtie from Jamet was hardly known. In fact, merchants habitually mixed cases of Côte Brune and Côte Rôtie in their inventories. In the early years of our company, before Côte Brune became known and coveted, one of our favorite sports was opening the cases of newly arrived Jamet to see which wine we’d received.

The wines for this dinner had been collected by us over the past 20 years and represented the inspired winemaking and viticultural not only of Joseph Jamet, but also his sons. Here’s the line-up of wines we tasted: