Pristine 1968 Barolos from an 18th-century cellar. 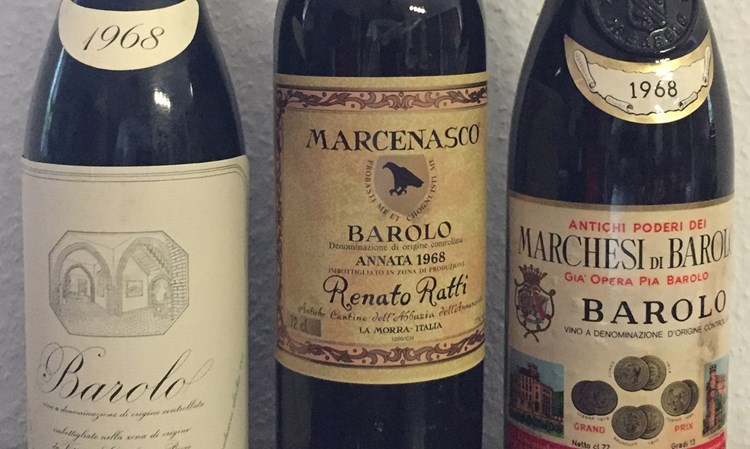 The Rare Wine Co. has earned its reputation as the country’s most trusted source for older Barolo and Barbaresco for a reason: we do our homework.

Not only are we relentless in vetting sources—which are almost always in Northern Italy, Switzerland or Germany—we actually taste multiple bottles of each wine before offering a single bottle for sale.

That’s virtually unheard-of in this age where more and more U.S. merchants are willing to offer older wines pre-arrival (i.e., that are still in Europe), without even a careful inspection of the bottles, much less having tasted them. In contrast, we have samples FedEx-ed to us, and if that’s not possible, we hold off selling until the wine arrives and can be thoroughly checked out.

And we are ruthless in inspecting each and every bottle, not only for the usual fills and labels, but for the firmness of the cork, the color of the wine and any signs of past seepage. We want you to be confident that when you open any bottle among friends, it will reflect well on you, and on us.

Which brings us to this offer. A very wealthy collector in Turin (one hour west of Barolo) bought a large quantity of 1968 Barolo on the birth of his son. The wines were all laid down in original cases in a deep underground cellar in the collector’s 18th century villa.

As often happens, his son couldn’t possibly drink it all and sold a chunk of it to a friend of ours with a small wine business near the Swiss border. Based on our friend’s glowing report, I was happy to buy a big part of it, but on the condition we could taste samples.

Going into this, our confidence level was high. The wines had become go-to bottles for our friend when he took clients to dinner. He’d gone through a mixed couple of cases and had yet to find a dud. And every bottle had passed all the visual tests to promise exceptional condition.

Our samples (2 bottles of each) were entirely consistent with his descriptions, not only in terms of condition, but the style of each wine. (He knows his stuff.)

The wines are not today’s big names, but there-in lies the beauty of this parcel. Each of the producers was highly respected 50 years ago, and was still working with a strictly traditional philosophy.

Gianfranco Bovio owned the beloved Ristorante Belvedere overlooking La Morra and had 4 hectares of Barolo vineyards below it, in Annunziata de la Morra. He made this Barolo not only for the restaurant but for a loyal flock of private clients.

Renato Ratti, the first man to attempt to classify the vineyards of Barolo, was in his prime (just 34 years old) when he made his 1968 Barolo Marcenasco. It came from a single 5-hectare vineyard, also in Annunziata de la Morra.

And Marchesi di Barolo was of course one of the historic estates of the Langhe. At this time, they only made one Barolo, a classic blend of all their Barolo vineyards, including Brunate and Cannubi.

As for the year, 1968 has been largely forgotten. It was eclipsed by other vintages of the era, but was an over-achiever, producing more than a few Barolos that stood the test of time if perfectly cellared. In his classification of Barolo vintages, Renato Ratti rated 1968 “very good.” And it was worthy of Giacomo Conterno making Monfortino.

Thoroughly road-tested by us, these are classic examples of traditional Barolo. And they soar above what you might have expected, given that there are no big-time producers or vintages here.

1968 Bovio Barolo “Belevedere”
A quintessentially feminine La Morra Barolo that has aged with remarkable grace. Bright ruby, with very little orange, the nose still features bright red fruit. The freshness of the nose extends to the palate, that is delicate, with plenty of lift.

1968 Marchesi di Barolo Barolo
A truffle-scented, ethereal charmer, and the wine that may appeal most to those who love old Barolo. Weightless like an old Burgundy, and with relatively light color, it manages to maintain a perfectly balanced, delicate sweetness, even after a couple hours in the decanter. Seems ageless.