This is the first time we've included this remarkable wine in one of our offers. Sadly, given our diminishing supply, it will almost certainly be the last.

It’s rare that you get the chance to experience one of the world’s great wines, in a great vintage from a great producer, under circumstances that are completely unexpected and unique.

But that’s precisely what happened to us a few years ago when we discovered 1971 Barisone Barolo—a wine whose startling back story was that it was made by none other than Francesco Rinaldi. And, having tasted countless bottles—virtually all of them remarkably youthful—we bought every bottle we could.

At just $195 a bottle—half what you’d pay for a bottle of the same wine with the Rinaldi label—you should do the same.

But, first, here’s the story of that intriguing, and brilliant, Barolo.

The Story of an Extraordinary Wine
In late 2011, an old friend in the wine trade in Italy had been offered a private collection, and we met in a local trattoria to have dinner and taste the wines. Included among the wines were 1958 Gaja Barbaresco, 1978 Giacosa Barolo Pugnane, 1961 Prunotto Barolo and 1971 Francesco Rinaldi Barolo. But there was also an interloper: two bottles of a wine unknown to any of us, but from the same great 1971 vintage: Barisone Barolo.

At first glance, I assumed Osvaldo Barisone to be one of countless Langhe producers from the ’50s, ’60s and ’70s that have now vanished. Later, I found out how wrong that assumption was.

First, we ran through the Gaja, Giacosa, Prunotto and Rinaldi along with some eye-opening Dolcettos from the ’70s and ’80s. Then came the first bottle of Barisone, which left me nearly speechless. Astonishingly full, sweet, youthful with classic Nebbiolo nuances all over the place. Was it a fluke? We opened the second bottle, and it was every bit as compelling.

We remember grabbing one of the bottles to study the label, which wasn’t that helpful. It simply noted: “cantina founded 1859.” But it wasn’t until we were back in the U.S. that we learned the wine apparently was made by Francesco Rinaldi ... yes, the same Francesco Rinaldi whose 1971 Barolo we’d tasted minutes earlier.

The Mysterious Mr. Barisone
It turned out that Osvaldo Barisone was not an old Langhe producer. He was a wine merchant in Torino, which we learned was still in business. We didn’t know if Osvaldo was the founder from 1859 or the current proprietor, but we found a phone number on the internet. Signora Barisone answered the phone, and then the elderly—but absolutely charming—Osvaldo picked up.

We explained that we had come across this wine with his company’s label on it and asked what he could tell us about it. For the next 30 minutes, he told us the story of how his family had been wine producers near Asti in the past. In 1969, he opened his own enoteca in Torino, and from that point on began buying Barolo directly from top producers for bottling under his own label.

(Note: at the time, this was a normal part of the wine business. Demand wasn’t like it is today; even some of today's blue chip producers were happy to sell at least some of their wine that way. In fact, until the 1970s, many of the Classified Growths of Bordeaux and the majority of Burgundy domaines still sold their wines in barrel to merchants for bottling under their labels.)

Osvlado bought the wines in demijohn, and then bottled them, leaving the bottles in great stacks, without labels or capsules, which were put on only when the wine was sold. He bought a different producer’s Barolo in each worthy vintage. He told us that 1971 was the only year their Barolo came from Francesco Rinaldi, which was later confirmed by Rinaldi. The last vintage in which Osvaldo bought any Barolo in demijohn for bottling himself was 1989. By then, the DOCG rules that had gone into effect in 1981 had made things too complicated for Osvaldo to continue.

The Secret of Demijohns
There was only one other mystery to be uncovered: why is the ’71 Barisone so amazingly good? The answer occurred to us immediately: the demijohns. If you’ve ever read our June 2010 blog on the very old Aldo Conterno Barolos aged in 12.5L brenta, you’ll know a bit about how aging in large bottles can slow down the aging process.

Rinaldi believed in demijohns for slow aging, and in the past was known to put part of its Barolo production in demijohn for further aging. We learned this about 20 years ago having been stopped in our tracks by a stunning bottle of 1967 Francesco Rinaldi Barolo. If the wine Osvaldo bought had not just been delivered in demijohn but, as we suspect, had been aged in demijohn, that could easily explain the wine's exceptional condition.

We bought every bottle of the 1971 Barisone Barolo there was. And we’ve quietly been selling it for a few years, to the point where we have less than a quarter of our original purchase left. (You can read a large number of CellarTracker notes for ’71 Barisone purchased from us that are astonishingly consistent for a wine of a such age and modest price.)

But this is the first time we've included this remarkable wine in one of our offers. Sadly, given our diminishing supply, it will almost certainly be the last. Fair warning. 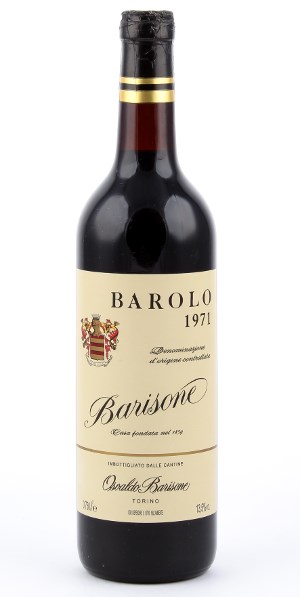