When Jaboulet Ruled the Rhône

From their library, 1978 Châteauneuf Les Cèdres

“The Benchmark House when I started in the Rhône in 1973.” 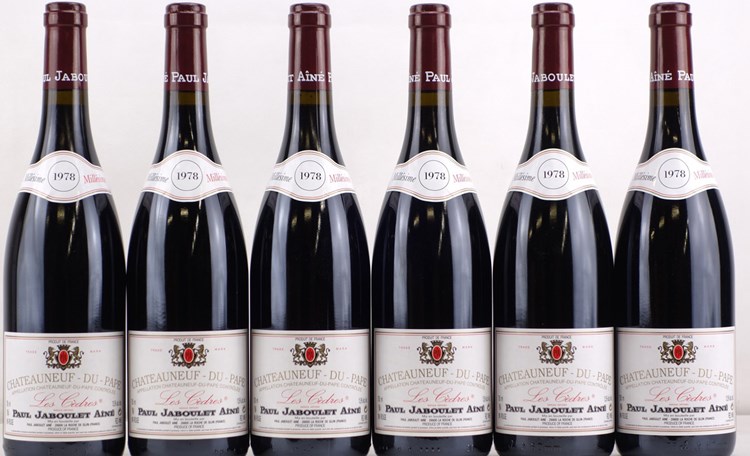 For four decades, from the 1950s through 1990, Paul Jaboulet Aîné was the great house of the Rhône Valley. As John Livingstone-Learmonth has written, Jaboulet was “the yardstick ... the trailblazer around the world ... bringing the very hearth of the Rhône into people’s lives.”

And they did so not only from their home base of Hermitage, but from all the great appellations throughout the Rhône, where they had a near monopoly on fruit from some of today’s most famous domaines.

Notable among their wines at the time was the towering Châteauneuf-du-Pape, “Les Cèdres.” There were many great Les Cèdres vintages from the 1950s on, but one of the most famous was 1978, arguably the greatest Châteauneuf year between 1970 and 1989.

Old School to the Max

A typical Les Cèdres blend was two-thirds old-vine Grenache, with the balance largely Syrah. The winemaking was classic: whole-cluster fermentation in concrete tank, a month-long maceration and 12-18 months aging in foudre.

Jaboulet’s carefully traditional winemaking made the most of its fruit, but what really made Les Cèdres so great at that time was their access to fruit from some of Châteauneuf’s greatest domaines.

This was, after all, a time when the likes of Henri Bonneau, Domaine de Pegau, Clos St. Jean, Usseglio and scores of other now-famous domaines bottled little or no wine under their own label. And Jaboulet was famous for having long-term contracts to get the best of it.

And we mean best. Robert Parker wrote many years ago that the 1967 Les Cèdres was made entirely from old-vine fruit from Ch. La Nerthe. It was not until the late 1980s that La Nerthe realized the fruit’s potential themselves, by creating its luxury Cuvée des Cadettes. But in the 1960s—and perhaps as late as the early 1980s—it was lavished on Les Cèdres. It’s no wonder that, at the time, Les Cèdres was as sought-after by collectors as Beaucastel.

Of course, from today’s vantage point, the idea that Jaboulet would have access to such fruit seems strange. But 40 to 50 years ago, there wasn’t the market for domaine-bottled Châteauneuf-du-Pape there is today.

Les Cèdres was the region’s royalty. It stood alongside Clos des Papes, Rayas, Beaucastel, Fortia and Mont Redon among the wines that Châteauneuf collectors picked off each vintage for their cellars.

We’re pleased, then, to be able offer immaculate bottles of the 1978 Les Cèdres, released in the last several years from Jaboulet’s library.