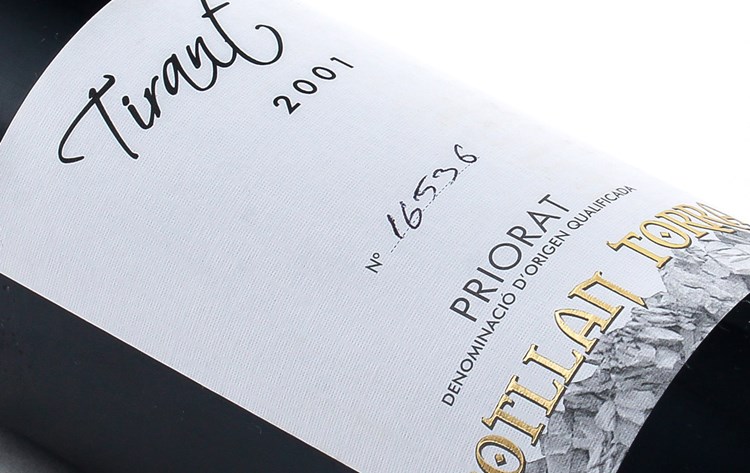 The architects of Priorat’s renaissance in the 1980s revealed that the region’s unique terroirs and ancient vines could produce great wine of startling originality. And it propelled several of them to worldwide superstardom.

Yet, one of the very first of the region’s pioneers—Jordi Rotllan Torra—was never well known. This was probably due to the fact that the renaissance’s epicenter was the town of Gratallops; Torra was somewhat isolated from it in the town of Torroja del Priorat.

Yet, Torra had his moment in the spotlight in the early 2000s, when Robert Parker singled out his 2001 Rotllan Torra Tirant as one of the wines of the vintage in Spain, with a rating of 96-98. And that wine has stood the test of time, developing beautiful texture and aromatics over its nearly twenty years since the vintage.

For reasons we’ll get to a little later in this offer, we’re able to offer a pristine parcel (that has lain in the same cellar for more than 16 years) at a truly remarkable price. Not only is the price compelling, the wine itself is available nowhere else in the world... at any price.

Back Story
Before arriving in Priorat in the 1980s, Jordi Rotllan Torra had been making wine in the nearby region of Penedès. So, he was very familiar with Priorat and was one of the very first to see the potential of the region’s neglected old vineyards.

Torra created his estate in 1984, just five years after Rene Barbier got everything rolling. His crown jewel was a steep slope of the region’s famed Llicorella slate soil, planted with 80 to 90-year old Garnacha and Cariñena vines, which he named for a heroic medieval knight, Tirant Lo Blanc.

Torra augmented these with Cabernet, Syrah and Merlot vines and, by the mid-1990s, he began bottling Tirant separately, as a pure terroir expression fermented in neutral foudre and then aged for one year in new Tronçais barriques.

The 2001 Tirant, from an especially fine Priorat vintage, remains the cuvée’s high water mark. With Parker’s rating, it quickly vanished upon release, with only rare sightings since then. But today, when you can find perfectly cellared examples, the 2001 Tirant is firing on all cylinders.

This Offer
As long-time RWC clients know, The Rare Wine Co. was one of the earliest US merchants to get a foothold in Priorat, when we joined up with Alvaro Palacios in the late 1990s. At about the same time, a merchant we know well in Europe also developed a strong interest in Priorat. And he became one of Torra’s best customers.

Like us, this merchant has a penchant for laying wines down that he believes have great aging potential. One of the wines that he decided to age is the 2001 Rotllan Torra Tirant. Recently he offered us a few cases of this stock at an amazing price. The wine had never left his cellar.

Here, then, is the rare opportunity to acquire one of the early legends of the Priorat renaissance, not only from exceptional provenance, but at a great price. But you’ll need to hurry.