“Everything one could desire in a dry red wine.” 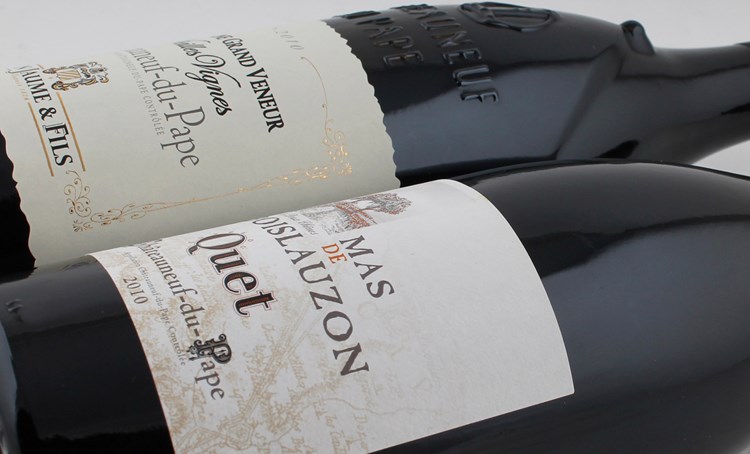 In fact, so ideal was the harmony of elements in 2010’s fruit that it enabled two of Châteauneuf’s greatest growers to fashion wines judged perfect by Robert Parker: the 2010 Domaine Grand Veneur Vieilles Vignes and 2010 Mas de Boislauzon Cuvée de Quet.

It isn’t only the ideal fruit and peerless skill of their makers that accounts for the perfect richness-meets-elegance balance of this pair. It’s also the location of their vineyard sources. The more we learn about Châteauneuf du Pape, the greater our understanding of the various terroirs that make up this large and famous appellation.

It's become clear to us that, through differences of elevation, exposure and soils, the the northern part of the appellation—with its century-old vineyards—often enjoy a different experience from those in Châteauneuf's southern zone.

Their north- through east-facing slopes and complex soils—with varying proportions of clay, sand and limestone—moderate the intense heat of Châteauneuf’s summers, leavening their fruit’s powerful richness with elegance and aromatic complexity.

And this is where both Grand Veneur’s and Mas de Boislauzon’s old vines are located, providing them with the opportunity to express 2010’s fantastic depth and harmony at its most elegant.

Grand Veneur was founded in 1826, but it wasn’t until Alain Jaume took over in 1979 that the family began to bottle their own production from their extraordinary vineyards.

And it wasn’t until 2006 that they isolated their finest holdings—mostly Grenache and Mourvèdre, with a little Syrah, in the top sites of Boislauzon and Cabrières—in their extraordinary Vieilles Vignes cuvée. Destemmed, fermented at cool temperatures for three weeks, and aged in a mix of neutral barrels and concrete tanks, it captures its great terroirs in the 2010 vintage with extraordinary purity.

Daniel Chaussy is the fifth-generation of his family to tend Mas de Boislauzon’s contiguous nine hectares in Châteauneuf’s far north. And since 2000, he’s been selecting his best fruit—80% Grenache and 20% Mourvèdre, planted in the 1920s in the Boislauzon, Gardiole and Cabrières lieux-dits—only in great vintages, for Cuvée de Quet.

Made by methods similar to those of the Grand Veneur V.V., the 2010 Cuvée de Quet is an equally profound rendering of its great terroirs in this historic vintage.