The Old School Has a New Star.

The smart money is on Pierre Cotton to become The Giant of Beaujolais’ Traditional Revival.

“I can think of few better indicators of the stratospheric potential of cru Beaujolais terroir than the nascent career of young Odenas winemaker Pierre Cotton.” 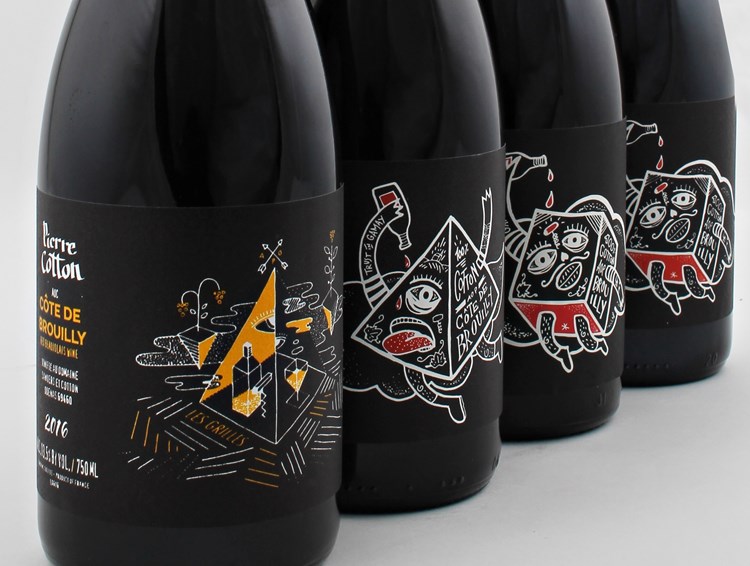 What goes around comes around. On life support in the 1990s and early 2000s, traditional winemaking has made a roaring comeback over the past decade. Its resurgence has been fueled by the realization that time-honored methods uniquely produce wines of grace, nuance and site expression.

And nowhere is this more true than in Beaujolais, where a new generation of traditional winemakers (many inspired by the legendary Jules Chauvet) have raised the bar beyond levels previously imagined. Behind this revolution have been a new and gifted 20-something 'Gang of Four': Jules Métras, Kevin Descombes, Yann Bertrand and Pierre Cotton.

But it is Cotton who could be the biggest star of all. Since his first vintage in 2014, he has taken the collecting—and drinking—world by storm, by making Brouilly and Côtes de Brouilly wines of nearly unprecedented clarity, balance and depth. And his intense following, first born in the bistros and cavistes of Paris, has now spread to this side of the Atlantic.

If you haven’t heard about Cotton, it’s because he makes no more than 500 cases of each wine, which are carefully allocated through friends and tiny importers. You will seldom find his best wines in a wine shop, and you are even less likely to read a review. (Like the rest of the New Gang, Cotton seems to disdain publicity.) But sought-after and coveted? You can bet they are.

Fortunately, we’re friends of one of Cotton’s friends, and received a choice allocation of his monumental 2015s and 2016s, which we’re pleased to offer as a compellingly priced 6-bottle assortment. They include not only his 2015 and 2016 Brouilly, from 65-year-old vines in Les Mines, but also his epic 2016 Côte de Brouillys, 100% Cotton and Les Grillés.

Pierre Cotton is the fifth-generation of his family to make wine in the village of Odenas, on the south slope of Mont de Brouilly, whose 500-meter, south-facing slope is one Beaujolais’ most distinctly great terroirs.

But Mont de Brouilly’s soils are complex. And when combined with its multiple exposures, they can be incredibly diverse in their expressions. For decades, however, they have almost always been anonymously blended into the Côte de Brouilly cuvées of Beaujolais’ large houses.

But Pierre is changing this, revealing the individual characters of old-vine Gamay from several specific sites, not only on Côte de Brouilly, but in adjacent Brouilly as well. He returned to the  family domaine from work as a mechanic at age 20, and following a season in the domaine’s vines—and stages with top natural winemakers in the Loire—served notice with his own strikingly-labeled wine in 2014.

Key to Cotton’s approach is the teachings of Jules Chauvet, who’s been a towering influence in Beaujolais through the wines of Marcel Lapierre, Jean Foillard, Yvon Métras and Georges Descombes.

Through his “next-generation” friends—Jules Métras, Kevin Descombes and Yann Bertrand—Pierre absorbed this classic school of Beaujolais winemaking, which features organic viticulture of low-yielding vines, semi-carbonic maceration of whole clusters, aging in neutral barrel and little to no sulfur. Now Cotton is applying these methods to the concentrated fruit from his ancient vines, to express small, individual terroirs with startling clarity.

You couldn’t hope for a better introduction to Cotton’s gifts than the four 2015-2016 wines we’ve sourced for this offer.

They begin with Pierre’s Brouilly, from both the 2015 and 2016 vintages. Made from 65-year-old vines in the 1.5 hectare pink granite and limestone-clay marl Les Mines vineyard, this is an incredibly pure rendering of old-vine Gamay grown in granite. It offers an ideal balance of red fruit and floral perfume, silky texture and firm, mineral-tinged structure.

The other two wines are Pierre’s two singular 2016 Côte de Brouillys, named 100% Cotton and Les Grillés. What sets these gems apart—even from the appellation’s historic greats—is that they give voice to unique soils within the appellation: pink and yellow granites, clay and la corne verte, a flinty rock found only in Cotton’s home village of Odenas.

With such wines it’s easy to see why Not Drinking Poison in Paris blogger Aaron Ayschough—whose on-the-ground reporting makes his writings essential reading for anyone interested in Beaujolais’ wines—calls Cotton “one of the region’s most promising young natural vignerons.”

Here’s your chance to see for yourself.