“Kind of like a liquid Holy Grail Riesling for purists. 97 rating.” 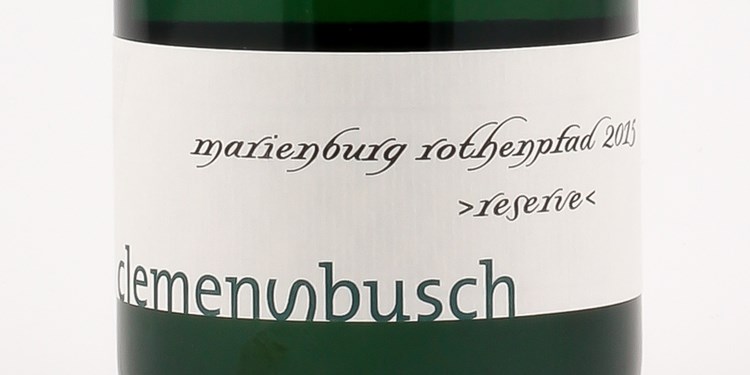 If ever a monumental dry Riesling were preordained, it was this one.

Three forces of nature converged at a very special moment in time. They were (1) the Mosel’s historic 2015 vintage; (2) the rare red slate and ancient vines of the Marienburg Rothenpfad vineyard; and (3) the divine guidance of trocken master Clemens Busch.

In a near-perfect growing season, ending in a long harvest period that allowed the Mosel’s growers to pick at ideal ripeness for every quality level, Rothenpfad and Busch created a dry Riesling masterpiece. Yet, even when his great “regular” 2015 Rothenpfad Grosses Gëwachs (“Great Growth”) had been bottled, Busch wasn’t done.

He had selected a tiny quantity of the best, most complex Rothenpfad lots for a special Reserve bottling, and aged them for a full two years on the lees in his ancient fuders, without sulfur. And the result, now in bottle, is pure magic.

But, due to its tiny production, the 2015 Clemens Busch Riesling Pündericher Marienburg Rothenpfad Reserve is almost completely unknown in the U.S.

If you love truly great dry Riesling, you won’t want to miss it.

Back Story
Clemens Busch descended from four generations of winemakers, taking over from his father in 1974. He continues his ancestors’ classic native yeast fermentation and aging in neutral 1000-liter wood fuder. But he also pioneered organic viticulture in the Mosel in 1984, evolving to biodynamic farming two decades later.

Applied to the nearly-vertical Marienburg’s ancient vines, Busch is rewarded with highly concentrated and complex Riesling.

But Marienburg isn’t just one terroir, it is many, encompassing multiple south-facing exposures as well as blue, red and grey slates. Long considered one of the Mosel’s greatest terroirs, generations of the Busch family have made wine here. Then, during the 1980s—when farming of a site as challenging as Marienburg became economically unattractive—Clemens was able to acquire additional parcels.

Red Slate Rarity
As a consequence, today Clemens is able to separately bottle Grosses Gëwachs Marienburg Rieslings from five different plots. And the most unusual of this unique group is Rothenpfad.

A rare one hectare island of red slate within the Mosel’s sea of blue and grey, Rothenpfad’s ancient vines were saved by Busch a dozen years ago when he cleared this overgrown, difficult to reach plot by hand. Rothenpfad produces singularly great Riesling, its hallmark Marienburg stony minerality punctuated with red slate derived jasmine and spice nuances.

Above all, while rich and complex, it bears the extra dimension and weightless intensity found only in wines from the greatest terroirs. And Clemens’ masterful, traditional touch in the cellar, made all the more expressive by its extended lees aging and zero sulfur use, captured the Rothenpfad magic in 2015 with astonishing clarity.

Altogether, this is a very special offer—a uniquely brilliant site, brought back to life and captured by one of the Mosel’s greatest natural winemakers, in a vintage built for profound dry Riesling at no more than 12.5% alcohol, enhancing its magical richness and complexity without heaviness. It doesn’t get any better than this.