The 2016 Vouvray Demi-Sec may be the greatest in Foreau's long history. Here it is, direct from the domaine and at a great price. 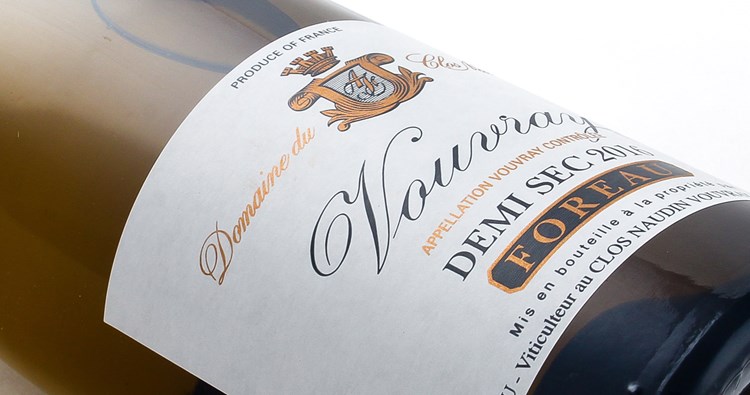 Since its founding nearly a century ago, Foreau's Domaine du Clos Naudin has been iconic for lovers of classic Vouvray. Blessed with one of the appellation’s greatest terroirs, four generations of Foreau have produced Chenin Blanc with few peers for complexity and longevity.

The Foreaus made the most of the great 2016 vintage. As Wine Doctor’s Chris Kissack has written, “All my encounters with the wines of Philippe and Vincent Foreau in this vintage have thus far been nothing short of mind-blowing.”

These include the entire range of sweetness levels from dry Sec to the luscious, but rarely seen, Moelleux Réserve. But the pinnacle may well be the Vouvray Demi-Sec.

For many, Demi-Sec is the ultimate expression of Chenin Blanc from Vouvray’s chalky, flinty terroir. The small amount of sugar frames the wine’s profound minerality and balances its acidity, performing much the same function as a small dosage in great Champagne.

And the frost-reduced 2016 vintage was made for great Demi-Sec, concentrating flavors, and setting the stage for the richness of a warm, dry summer and perfect harvest.

Foreau’s 2016 Demi-Sec is a wine for the ages. And we’ve secured a direct allocation we can offer for just $54.95 a bottle, and even less with a purchase of 6 bottles or more. That’s a price completely out of proportion to the wine’s historic quality.

Back Story
Acquired by Armand Foreau in 1923, Clos Naudin is located on Vouvray’s vaunted Première Côte (“first slope”), where the soils of flint, clay, limestone and tuffeau chalk produce Vouvray of intense minerality. The family’s vines are southwest-facing at mid-slope in the prized lieux-dits of Les Perruches and Les Ruettes.

Today, Philippe and Vincent Foreau continue to make the family’s Vouvrays from old vines using the same methods as their ancestors, including fermentation in neutral 300-liter barrels.

After fermentation was over in 2016, the Demi-Sec spent a further six months aging on the lees in the same barrels, to preserve the primary aromas and set the stage for its long development in bottle.

As with all Foreau wines, sulfur use was low, and the 2016 Demi-Sec didn’t go through malolactic fermentation, to preserve precious acidity.

At six years from the vintage, the 2016 Foreau Demi-Sec is on the cusp of maturity but can be expected to become increasingly profound for many decades to come.

And so it belongs in the cellar of anyone who loves the magic found only in traditionally made Chenin Blanc from Vouvray’s best terroirs, through a master’s hands.

“All my encounters with the wines of Philippe and Vincent Foreau in this vintage have thus far been nothing short of mind-blowing and happily this demi-sec doesn’t want to let the side down. The residual sugar is a classic 20 g/l, but it is the intensity set within the wine’s seemingly enviable purity that really entices. The nose is just incredible, filled with the scents of crushed pears dusted with icing sugar, layered with a gentle caramelised-apple sweetness, at all times presented in a beautifully pure, expressive and classical style. It has a delicious presence on the palate, polished and pure, full of citrus fruit pith, the substance and extract of the wine countered very nicely by its acid freshness and depth of orchard fruits. A quite brilliant wine, a truly spine-tingling demi-sec, the true essence of Vouvray, setting the bar very high for the rest of the appellation. And it has great length as well, long and phenolic.”

“… absolutely delectable and impeccably balanced. Tender and succulent at first, offering exotic mango-like fruit flavors, the naturally lithe acidity carries this wine through while the tropical fruit coats the mouth, leaving a heady fragrance. This is a wine to enjoy for its suave yet athletic frame.”