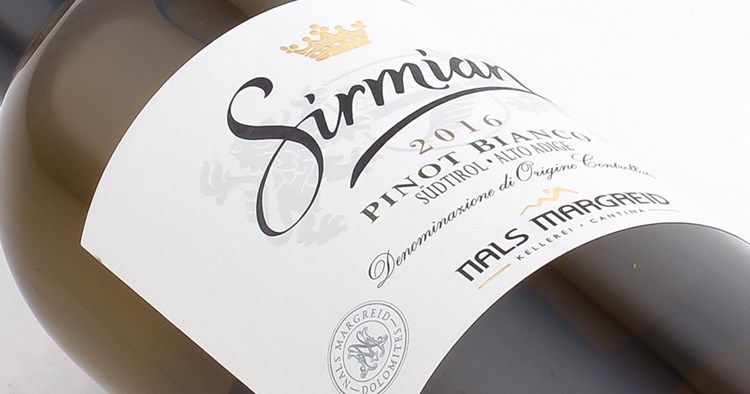 It isn’t made by Valentini, Gravner or Miani. Nor is it from an indigenous Italian variety found nowhere else; it is made from Pinot Bianco—aka the Pinot Blanc of Burgundy and Alsace.

Yet, for site-expression, complexity and longevity—as well as capacity for delivering pleasure—it rivals anything made in Italy.

The wine is the Nals Margreid Pinot Bianco “Sirmian.” Courtesy of an ideal terroir for the variety, located in the northernmost region of Alto Adige, it is among Italy’s greatest and longest-lived white wines. And in the locally great 2016 vintage, it is one of the towering examples of this great cuvée.

An Ideal Terroir
Nals Margreid is a cooperative. And like the Produttori del Barbaresco, it towers over most of the world’s co-ops, representing many of its region’s best growers and vineyards. And among these vineyards, undoubtedly the greatest is the Pinot Bianco-planted Sirmian, which Ian D’Agata calls “an authentic Grand Cru area for this variety.”

Sirmian’s steep, terraced slopes of iron-rich, crystalline volcanic bedrock, with highly complex, glacially deposited topsoils, are located within Alto Adige’s Terlano subzone, known among the cognoscente as one of the world’s greatest terroirs for Pinot Blanc or Pinot Bianco.

The soils and exposure keep yields low, enhancing concentration. And Sirmian’s wide daily temperature swings, aided by southerly breezes from Lake Garda and northerly ones from the Alps, make for a long, slow maturation of the grapes, resulting in Pinot Bianco of kaleidoscopic aromatic complexity, rich texture and decades of aging potential.

Through this minimal approach, Schraffl captures the essence of Sirmian’s Alpine aromatic complexity and minerality. This is truly one of Italy’s greatest white wines, yet it remains under the radar to all but the most knowledgeable insiders, and it is only rarely seen in the U.S.

In D’Agata’s words, “only a few places in the world make truly exceptional Pinot Biancos. Italy’s Alto Adige is one of them … amazingly refined and long-lived wines.” And one of the greatest is Nals-Margreid’s Sirmian. Here’s the chance to see for yourself.