Josh Raynolds on the 2016 Northern Rhônes

“You are going to want these wines in your cellar.”

Jeb Dunnuck on the 2016 Southern Rhônes 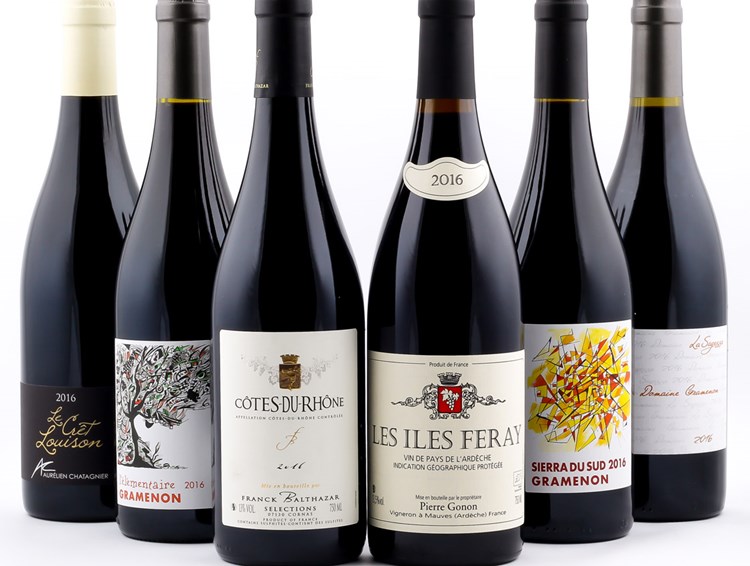 For connoisseurs of Rhône classicism, 2016 is hard to beat. It’s a year that produced complete wines with an ideal balance of finesse, complexity and structure throughout the region. Jeb Dunnuck calls it “truly extraordinary” for the south, while Josh Raynolds praises the northern wine’s “balance, freshness and expression of terroir.”

And it’s a measure of the vintage that such quality exists throughout the hierarchy. This remarkable year gave the Rhône’s growers the chance to make not only Côte Rôties and Châteauneuf du Papes, but also regional wines, of transcendent nuance and depth.

With climbing prices for the top wines, 2016 affords the chance to experience greatness at bargain prices. So, we've rounded up six regional cuvées from four of the region’s best, each of which has the year's depth, nuance and structure in spades.

This is a set of 2016 Rhône wines that punches well above its weight class, delivering depth of character and quality easily surpassing their modest classification and price.

Taken together, this is a fantastic opportunity to experience what four of the Rhône’s top growers achieved in this historic vintage, without breaking the bank.

Small Gems from the Northern Rhône

Our tour of the Rhône’s transcendent 2016 regional cuvées begins in Saint-Joseph, where Domaine Gonon has ascended to iconic status, with three-digit prices to match. Yet, brothers Pierre and Jean Gonon also make a Vin de Pays de l’Ardèche “Les Îles Feray”, sourced from younger Saint-Joseph vines and the St. Joe lots that the Gonon frères don’t feel merit inclusion in the grand vin.

Les Îles Feray’s depth and purity are achieved through the brothers’ old-school whole-cluster fermentation and aging in neutral demi-muid. One sip and you’ll know why John Gilman calls Gonon “one of the greatest estates of the northern Rhône today.”

While Gonon is now famous, another traditional Saint-Joseph star is emerging: Aurelien Chatagnier. He has Syrah vines just outside the appellation as well, on the steep granite slope of the Le Crét Louison lieu-dit. From them he made a 2016 that, in its beautifully-balanced, pure expression of both terroir and growing season, mirrors his fine Saint-Joseph.

No longer the secret of insiders, Franck Balthazar has taken his place at the top of everyone’s short list of traditional Cornas growers. But he's also expanded into the Côtes du Rhône, where he's working with old-vine Syrah and Grenache in one of its northernmost villages, Vinsobres.

Situated a full hour north of Châteauneuf-du-Pape, Vinsobres is known as a providential site for Syrah, thanks to its higher elevation and cooler temperatures.
And 2016 was the perfect vintage for Franck's work here. The year's terroir-expressiveness dovetailed perfectly with his winemaking, yielding a Côtes du Rhône that exudes grace, perfume and purity.

Gramenon: Star of the South

Unlike the other growers in this offer, Domaine Gramenon has no holdings in prestigious appellations. Yet, the stunning purity of expression of Gramenon’s array of Côtes du Rhône terroirs has made the domaine a cult star among southern Rhône insiders.

Through biodynamic farming and natural, traditional winemaking, vigneronne Michèle Aubéry-Laurent fashions a range of cuvées that Andrew Jefford describes as having “great finesse, grace, perfume, and depth of flavour.”

From the refinement of the high-altitude old-vine Grenache Valreas L’Elementaire, to the dark-fruited old-vine Grenache power of La Sagesse, to the pure Syrah of Sierra du Sud, Gramenon’s 2016s are all brilliant. They capture the complex limestone, clay and sand soils of the sheltered Valréas plateau and the elegance of the vintage with startling clarity.