A Feast of Grand Crus

Built from a mosaic of Bierzo's most illustrious grand cru vineyards, Alvaro Palacios' Villa de Corullón is among Spain's most pedigreed red wines. Yet you can buy six bottles of the 2017 and pay just $44.95/bottle and even less by the six-pack

“The most serious wine project in Spain. Period.” 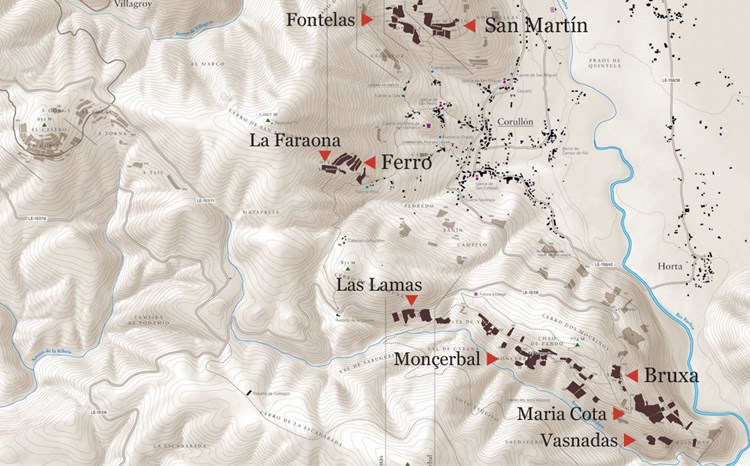 Imagine if the Domaine de la Romanée-Conti's grand cru holdings in Vosne-Romanée weren't limited to the village's four crown jewels: Romanée Conti, La Tâche, Romanée-St. Vivant and Richebourg. Make believe for a second that it also owned some or all of Vosne-Romanée’s two other grand crus, La Romanée and La Grand Rue.

Also imagine if, in addition to its iconic single-vineyard bottlings, DRC offered a single wine that was a blend of all of these grand crus, as the ultimate expression of the Côtes de Nuits’ pre-eminent terroir.

Of course, that will never happen. But something very close is occurring in Spain’s ancient Bierzo region—in the village that towers above others in the same way Vosne-Romanée does in the Côtes de Nuits. That village is Corullón.

A quarter century ago, a single domaine, Descendientes de José Palacios, came to control the town's grand cru vineyards in a way that not even DRC does in Vosne-Romanée. In the process, Descendientes has become, in the words of Luis Gutiérrez, "The most serious wine project in Spain. Period."

The Descendientes bottlings best known to RWC clients are its three iconic single-vineyards: La Faraona, Las Lamas and Monçerbal. But batting clean-up in the order is an even more fascinating wine, Villa de Corullón.

Villa de Corullón is built from a dizzying array of the village's grand cru vineyards, including not only Monçerbal and Las Lamas, but also San Martín and Fontelas, both of which were once notable Descendientes single-vineyard bottlings. In 2017, Monçerbal and San Martín together comprise nearly 60% of the blend.

The blend also features La Faraona's neighbor, Ferro, along with Vasnada, Maria Cota and Bruxa, each representing a different elevation, exposure and soil. As such Villa de Corullón is the ultimate expression of the village's terroir.

Having tasted (multiple times) every vintage of Villa de Corullón back to the first in 1999, we’re certain Villa de Corullón has reached a new level of perfection in 2017. In its harmony, seamlessness and gorgeous texture, it is stunningly close in quality to the single-vineyard cuvées, as evidenced by Gutiérrez’s 94-96 point rating.

Yet, rather than sell for $100 to $1000 a bottle as the individual grand crus deservedly do, we can offer—direct from the domaine—2017 Villa de Corullón, for just $44.95 a bottle, and even less by the and six-pack. Is there a greater bargain in wine?