2017 Trediberri Barolo delivers traditional magic in an opulent vintage. At $44.95, it's an insane value.

“Nicola Oberto is one of the most dynamic, emerging producers in Piedmont today.”

“One of the most knowledgeable and passionate young producers to have appeared on the Langhe scene in years.” 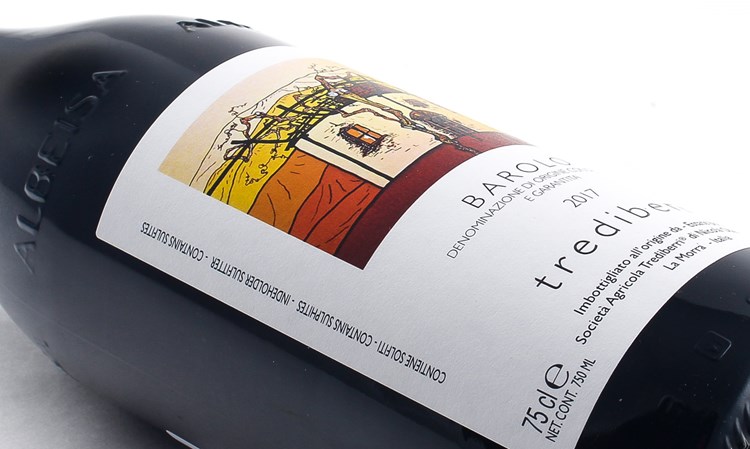 When Barolo’s New Wave vs. Old School war broke out in the 1980s, La Morra was famous for being modernist territory, with Accomasso and Marcarini among the village's few diehard traditionalists.

Today, many of the former modernists are using much more traditional methods, but you would still hardly call La Morra a bastion of traditionalism. In fact, one of the few new Old School La Morra estates to appear in the past 40 years is Trediberri, a partnership of three men: Federico Oberti and his son Nicola, with Vladimiro Rambaldi.

Trediberri's focus is La Morra’s historic Berri zone. It’s this combination that gives the estate its name: Tre-di-Berri, or Three of Berri.

The purity and Old School character with which they express their outstanding La Morra sites has earned Trediberri a place on Antonio Galloni’s short list of Piedmont’s “most promising estates … producers knocking on the door of the elite.”

Trediberri's 2015 and 2016 Barolos were both awarded 94-point ratings by Galloni, who called Nicola Oberti “one of the most dynamic, emerging producers in Piedmont today,” making wines that “show tremendous purity and sophistication.”

Now, with the release of Nicola's gorgeous 2017 Barolo, we see that the previous vintages were no fluke. Despite the unique characteristics of each year, all three Barolos are classic expressions of La Morra, but each with its own vintage personality.

While the 2015 and 2016 have disappeared from the market, the 2017 has just arrived. As Trediberri's U.S. importer, we're obliged to devote most of the small U.S. allocation to top restaurants, but we were sure to set aside a few cases for our private clients. You'll want to grab what you can at the astonishingly low price of just $44.95 per bottle.

Reviving a Great Terroir
Trediberri was founded in 2007 when the three partners acquired their five-hectare parcel just over a mile from the heart of La Morra. Federico had retired two years earlier following more than three decades in the cellar of Renato Ratti.

Federico had not only been mentored by one of Barolo’s iconic figures (Ratti), he was also descended from several generations of farmers with great holdings, most notably parcels in the heart of Rocche dell’Annunziata. And Federico's wealth of knowledge has been passed on to Nicola, who has also had the opportunity to learn from La Morra's sole surviving Old School legend, Lorenzo Accomasso.

The Berri vigneto is the westernmost in the entire Barolo region. It's a series of steep slopes of Messinian period soils—younger and different from those in La Morra’s better known eastern crus—of limestone bedrock and pebbles, punctuated by outcroppings of sandstone, overlooking the Tanaro River.

Berri’s ideal exposition, elevation and river-cooled climate made it prized as a vineyard site for centuries, as evidenced by the remnants of ancient vigneti found there today. But due to the backbreaking work required to tend these slopes, they were largely abandoned in the years following World War II, as Berri’s growers took more lucrative jobs elsewhere. Also, Berri is one of those relatively cool micro-climates that have benefited enormously from warmer growing seasons over the past 20 years.

The Trediberri parcel lies between 350 and 430 meters elevation. The warmth of its south-through-southwest exposure is moderated by cooling breezes from the Tanaro and brings the parcel's fruit to perfect ripeness.

A Classic Blend
The Berri vigneto makes up the majority of Trediberri's 2017 Barolo, which is made in the tradition of marrying the fruit from complementary sites. While Berri's powerfully structured Nebbiolo dominates, it is balanced by the perfumed elegance and silky structure from eastern La Morra’s Capalot vineyard.

In the cellar, Nicola’s work is inspired by the time honored-methods of Barolo's Old School, with a three-week fermentation and maceration in concrete tanks, followed by two years aging in Slavonian oak botti by Garbellotto, the cooper favored by cantine Bartolo Mascarello, Cappellano and Giuseppe Rinaldi.

The 2017 Trediberri Barolo is a complete, and very classical, expression of La Morra, but with the richness of the vintage. It deserves a place in any cellar devoted to classic Barolo.