In 2018, Peter Sisseck’s Ch. Rocheyron took its place with other St. Émilion greats. You can own it now, ex-château. 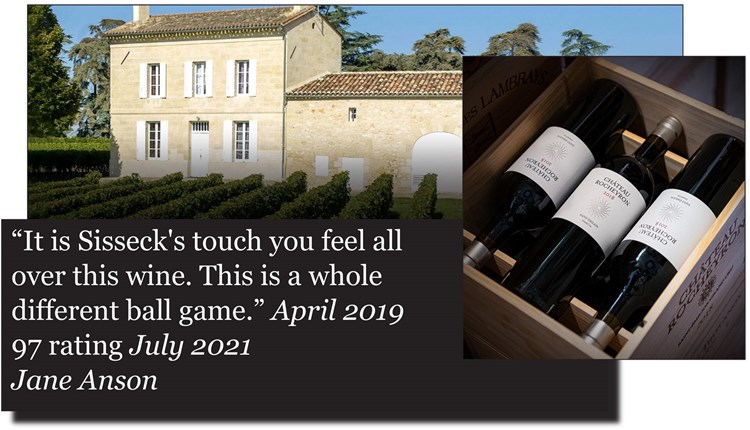 Before venturing to Spain in 1990, eventually to make Pingus, Peter Sisseck trained under some of Bordeaux’s most renowned winemakers. That experience groomed him to become the iconic winemaker he is. But he was always destined to return to Bordeaux and to make his mark there as well.

So, 13 years ago, when the grand cru, Ch. Rocheyron, with old vines on St. Émilion’s plateau, came on the market, Peter grabbed it. Peby-Faugeres’ Sylvio Denz became his financial partner, but Peter is solely in charge of viticulture and winemaking.

The changes Peter made at Rocheyron were immediate and bold. He achieved biodynamic certification for the vineyard within just five years. And he made countless refinements in the cellar that would give classical proportions to Rochyeron’s wine.

But, still, it took time to get Rocheyron into the Big Leagues. That happened in the rich, concentrated 2018 vintage, as Rocheyron won widespread acclaim. Having tasted every vintage since 2010, we can attest that 2018 is at an entirely new level. It is the wine that Peter always hoped to make in Bordeaux.

Thanks to our nearly 30-year friendship with Peter (including being the sole U.S. importer for Pingus since the 1998 vintage), Peter set aside the entire direct U.S. allocation of 2018 Rocheyron for The Rare Wine Co.

Consequently, we can offer it in sealed, 6-bottle original wood cases for an amazing $570, which is only $95 a bottle! It's unavailable anywhere in the U.S. at any price.

That makes $95 a bottle nothing less than a gift. But with 2018 Rocheyron’s tiny production, it’s a gift that won’t be around for long.

Natural and Minimal
Ch. Rocheyron is located on Saint-Émilion’s fabled limestone plateau alongside such legends as Ausone, Pavie and L’Angélus. And though small—only 7.5 hectares are planted—its terroir is exceptional: just a half-meter of topsoil on a bed of solid limestone.

The average age of the vines—5 hectares of Merlot and 2.5 Cabernet Franc—is nearly a half-century, but what really got Peter’s attention was a tiny plot of 80-year old Cabernet Franc vines. Sisseck loves Cabernet Franc and with his experience with Pingus’ ancient Tinto Fino, he knew that Rocheyron’s vines were capable of producing extraordinary fruit.

Biodynamically farmed with “First Growth” attention to detail, Peter is harvesting low-yield, concentrated fruit that expresses the essence of its great terroir. No expenses have been spared in maximizing the estate’s potential, including a ruthless selection during each harvest.

In the cellar, Peter works simply and traditionally. He ferments the Grand Vin in concrete tanks at low temperatures for gentle extraction. All movement of the wine is gentle as well, and barrel aging is for 16 months, with new wood kept to about one-third to favor purity.

Peter has said that “the 2018 vintage shows Bordeaux at its best: classic in style, very pure and transparent. It may easily be the best wine we have made so far.” And with 97-point ratings from Jane Anson, James Suckling and The Wine Cellar Insider’s Jeff Leve, Peter is not alone in that opinion.

This is very simply a fabulous Saint-Émilion, and with our exclusive direct allocation from Peter, the only place you’ll find it is here. Not to be missed.