A Coming of Age in Côte Rôtie

“One of the great producers of classically styled Côte Rôtie … 2015 is an outstanding year for the Barge family,”

“The finest I’ve tasted from this estate.” 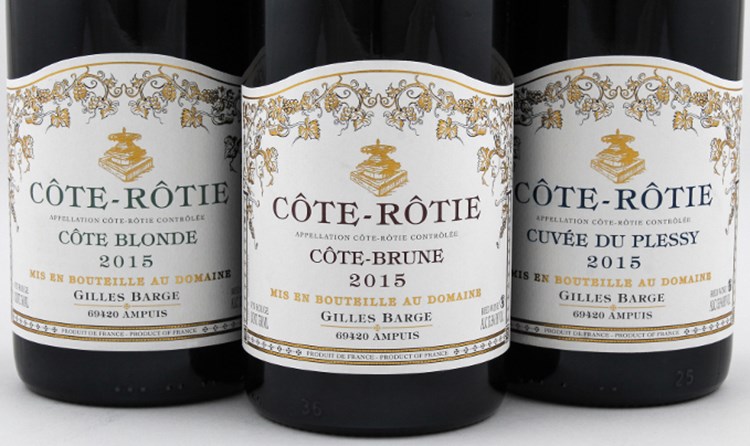 In the Northern Rhône, 2015 will go down as one of the great vintages of our time.

Young Julien Barge made the most of this great year. Just three years after succeeding his legendary father Gilles, Julien crafted wines that rival anything ever made in the long history of this Côte Rôtie dynasty.

Three of Julien’s 2015s promise to become iconic: the very rare Côte Blonde, the sublime Cuvée du Plessy and the family’s crown jewel, Côte Brune, which John Gilman says “may well end up being one of the very finest wines of the vintage.”

Back Story
Since 1929, when they became the first Côte Rôtie growers to sell domaine-bottled wine, the Barge family have been dedicated to the canon of traditionalism: long fermentations, skillful use of whole-clusters, gentle extractions and aging in largely neutral barrels, including demi-muids, Côte Rôtie’s ideal vessel.

And since 1979, they have been standard-bearers for how one makes Côte Rôties of great purity and expression from individual sites or lieux-dits.

From the beginning, the family’s crown jewel has been the Côte Brune lieu-dit, whose vines of 40 to 60 years of age are planted in the brown schist soils of Côte Brune’s steep upper slope. In 2015 only 400 cases were produced of this magical expression of the Brune vineyard's power.

Cuvée du Plessy is the family’s homage to traditionally blended Côte Rôtie, named for vineyard owner Joseph du Plessy, with whom Barge has collaborated since 1978. A marriage of fruit from the Côte Blonde, Lancement, Janet and Baleyat lieux-dits in Côte Rôtie’s historic heart, the 2015 is a perfectly balanced blend of structure and complexity.

With the 2015 vintage set to go into the history books as one of the greatest Côte Rôtie harvests ever, you won’t want to miss this opportunity to acquire these truly compelling 2015s. Don’t look back a year or two from now regretting that you didn’t buy when you had the chance.

“93+ rating … one of the most classically-structured examples of the 2015 vintage … the bouquet out of the blocks is quite black fruity in profile, offering up scents of dark berries, cassis, charred wood, espresso, roasted meats, a superb base of soil, plenty of smokiness and a bit of black olive in the upper register. On the palate the wine is full-bodied, focused and soil-driven … Great juice in the making ….”

“**** … shows liqueur fruit that resembles cassis de Dijon, blackberry, with mint liqueur. It has 2015 darkness. The attack is muscular, sturdy, holds concentrated, prolonged stone black fruits flavour. There’s a glimpse of gras before the finish, a piled high mass of dark jam fruits. This has a wild side, an earthy, grounded nature, a touch of late dryness, dried fruits.”

“ … one of the most classically-structured examples of the 2015 vintage … The bouquet out of the blocks is quite black fruity in profile, offering up scents of dark berries, cassis, charred wood, espresso, roasted meats, a superb base of soil, plenty of smokiness and a bit of black olive in the upper register. On the palate the wine is full-bodied, focused and soil-driven, with excellent mid-palate depth, ripe, seamless tannins and plenty of grip on the long, nascently complex and utterly classical finish. Great juice in the making, but patience will be required. 2025-2075.”

“… 95% Syrah and 5% Viognier. This cuvée is fermented with 100% whole clusters and is aged 24-36 months in demi-muids. Black raspberries, spice, chocolate and peppered meat notions flow to a rich, textured, beautifully concentrated, voluptuous Côte Rôtie that has present tannin, solid balance and a great finish. It’s a beautiful wine that delivers the goods.”

“… a marvelous wine in the making. The bouquet is pure, complex and vibrant, wafting from the glass in a mix of black raspberries, cassis, hazelnuts, roasted gamebird, a refined base of soil, pepper and a smoky topnote. On the palate the wine is deep, full-bodied, complex and already velvety on the attack, with an excellent core, impressive backend mineral drive, ripe, fine-grained tannins and a very long, nascently complex and extremely promising finish … this is going to be a great wine when it is ready! 2028-2085.”

“… dark red robe. The nose is full, bears an aroma of stewed black stone fruits, has a southern sweetness within. The palate bears juicy gras with a wheel of supple tannins around it, presents a wholesome glass of wine. There is a fine aromatic theme along it, a floral softness. It reaches out well to the finish. It’s a traditional style of Côte-Rôtie, with the softness of the Blonde sector at its heart.”