On the Verge of Extinction 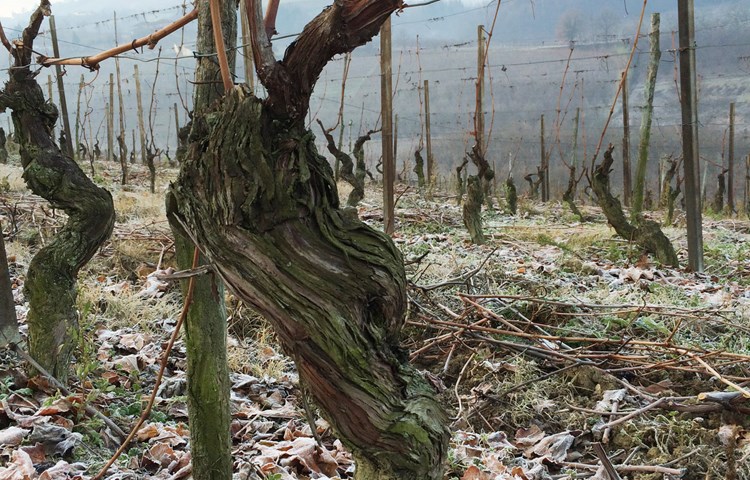 Virtually hidden in Piemonte’s rich history is the story of a forgotten cousin of Nebbiolo, called Nebbiolo Rosé.

Though a component of many great Barolos and Barbarescos of the past, it suffered from tiny yields and relatively light color—hence the variety’s name. Yet, these deficiencies were more than made up for by the wines’ sensual texture and haunting perfume.

Sadly, Nebbiolo Rosé all but died out, replaced by Nebbiolo clones known for their productivity and deeper color. By the late 1970s, only a handful of producers still grew it, including two giants of the past.

One was Vietti’s Alfredo Currado—in the Briacca cru—and the other was Enrico Giovannini-Moresco, whose Barbaresco Podere del Pajoré was entirely planted to Nebbiolo Rosé. Sadly, neither wine was made after 1982.

Nebbiolo Rosé has developed a cult following in recent years, thanks largely to the occasional old bottle of Giovannini-Moresco’s Barbaresco that surfaces. For the few of us who’ve experienced one of those prized bottles, finding Barolos and Barbarescos made with Nebbiolo Rosé has become a quest.

A close friend in the wine trade (who shares our passion for this enigmatic grape) tipped us off to an extraordinary discovery: the rare Barbaresco Rose delle Casasse Riserva of a little-known estate, Cascina Baricchi. The wine—which has only been made three times—is not only entirely from Nebbiolo Rosé, the vines are documented as being over 100 years old.

Fortunately, we learned about the wine just in time to visit and to grab a small allocation of the 2010 as it was beginning to run out. This wine is a must-have for anyone who is fascinated by the varied and minutely nuanced expressions of the Langhe’s greatest wines.

There’s an interesting history to many of the Langhe’s greatest wines. But even within that context, Rose delle Casasse Riserva stands out. And it begins with the vines themselves: twenty rows of Nebbiolo Rosé planted in 1913 on a west-facing slope of clay, sand and limestone Sant’ Agata marl, on the border of Neive and Treiso.

Vines this old are almost non-existent in the Langhe, and old Nebbiolo Rosé vines are rarer still. (The twenty rows of vines are all that survive from the original planting.) This makes Casasse’s Nebbiolo Rosé a Barbaresco treasure: surely among the last ancient plantings of a distinct Piemontese grape variety, in a remote, little-known place seemingly designed to optimize its qualities.

Wine in His Blood

There’s also the grower and winemaker, Natale Simonetta, whose great-grandfather was Angelo Gaja’s grandfather. But unlike the Gajas—who’ve been growers for 150+ years—Natale’s family bought their first vines in 1979, when they acquired the Cascina Baricchi estate.

At first, they only made wine to sell to local families and restaurants in demijohn. But that was enough to inspire Natale to attend France’s highly-regarded Montpelier wine school, followed by stages in Champagne and Burgundy. Those experiences—coupled with his genes—produced one of the most inquisitive yet traditional winemakers we’ve come across in the Langhe.

He takes full advantage of Casasse’s windswept exposure to farm his vines naturally. The cool aspect also increases the grape’s hangtime, allowing the development of greater complexity. This allows him to pick as much as three weeks after his neighbors, yet at lower sugar levels.

In the cellar, Natale crushes the grapes by foot for the most gentle extraction possible. He then ferments and macerates for a full forty days, using the ultra-traditional capello sommerso. That gives the wine its firm structure.

And to maximize the wine’s expressiveness, Natale gives it three years aging in 500 to 800-liter barrels, followed by bottling with a minimum of sulfur.

The result is an utterly beautiful Barbaresco that illuminates the delicacy for which Nebbiolo Rosé is known. It is remarkably expressive, showing even greater nuance when decanted.

Apart from Poderi Cogno’s Barolo Riserva “Vigna Elena,” the 2010 Rosé delle Casasse is the only contemporary Barolo or Barbaresco we know that is made purely from Nebbiolo Rosé.

And while the search goes on for other living examples of Nebbiolo Rosé, it is likely that none will outshine the Rose delle Casasse. This important wine should not be missed.