If Condrieu ever had a Gentaz ...

“This is the top house for elegant, utterly refined Condrieu.”

“Readers looking for the best Condrieu has to offer need look no further.” 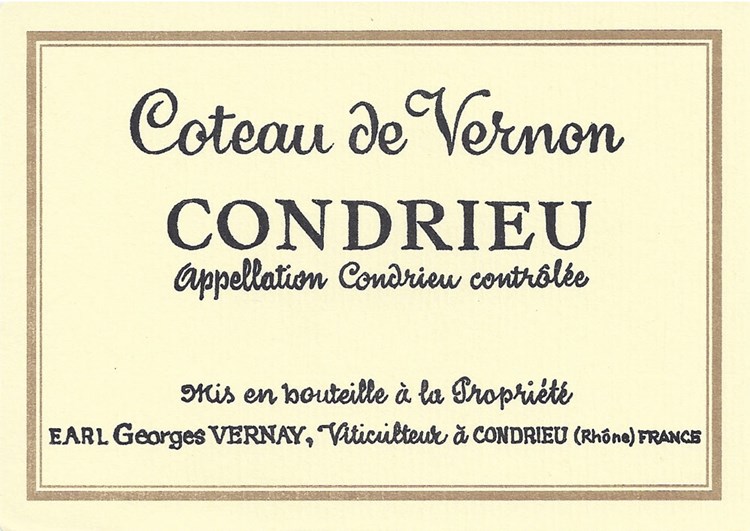 The Heart & Soul of Condrieu

For more than forty vintages, the late Georges Vernay was the towering figure in Condrieu, the man who saved both the appellation and Viognier from extinction, while producing wines that stood alone for their grace, complexity and aging ability.

Georges died in 2017 at age 92, but had long since passed the torch to his daughter Christine. And she has—since taking charge in 1997—brought the domaine to even greater heights. In fact, Rhône guru John Livingstone-Learmonth was prompted to write that, at the time of Georges’ passing, “the domaine’s standing had never been higher.”

And there are no better examples of Christine’s artistry than the 2015 Coteau de Vernon and 2014 Les Chaillées de l’Enfer. She took her fruit from Condrieu’s most iconic terroir in back-to-back top vintages and created two of the greatest wines of this legendary domaine's modern era. Sadly, little of either wine was made, with less than 600 cases of each made per vintage.

Back from the Brink

When Christine took the domaine’s reins, she was following in the footsteps of the man whose career not only spanned the appellation’s history, but defined it.

Georges began working with his father Francis in 1944, at age 16, four years after Condrieu was granted appellation status, at a time when almost all of its production was demi-sec for drinking very young.

As in neighboring Côte Rôtie, however, Condrieu nearly disappeared after World War II, it’s steep vineyards abandoned in favor of easier, more lucrative work. In Condrieu, however, the situation was even more dire. Not only had the area under vine dwindled to just 7 hectares by 1960, they represented nearly all of the Viognier planted in the world at that time.

Yet, Vernay continued to believe in Condrieu. As Livingstone-Learmonth recounts “in the summer of 1973, the only name mentioned to me to go and see at Condrieu was Georges Vernay, who was then 48 years old, and the single person keeping the depressed appellation on its feet.”

Ultimately, he led Condrieu back from the precipice, inspiring his fellow vignerons over his 30-year reign as president of Condrieu’s grower association, and through the example of his wines, the appellation’s reference standard since he pioneered their elegantly dry, long-lived style in the 1940s.

Vernay also supplied Viognier cuttings to growers outside of Condrieu, ensuring this rare variety’s continued existence. This earned him the nickname of “Mr. Viognier,” in addition to his title of “the Pope of Condrieu” as the savior of the appellation.

Coteau de Vernon and Les Chaillées de l’Enfer are sourced from ancient vines in the heart of Condrieu, where the appellation’s most elegant, mineral wines are found.

The two cuvées come from adjacent sites on the vertiginous Vernon slope, whose unique arzelle topsoil of weathered granite and schist over clay. According to Georges, this is “the vine’s natural home,” and key to their essential Condrieu character.

Today Christine continues with the methods developed by her father to best express these magical sites. Yields are very low at 25 hectoliters per hectare, and the fruit is picked at perfect ripeness to retain the terroir’s freshness and minerality.

Christine presses whole clusters for aromatic complexity, settles the juice and then ferments and ages her Condrieus in barrels, 25% new. The wine ages for 12 to 18 months, with regular stirring of the lees, while the malolactic is blocked to preserve acidity.

These spectacularly elegant Condrieus are just as expressive of their great sites as were Christine’s father’s. Yet, they may have even greater refinement and purity. They belong in the cellar of anyone who loves great Condrieu.