A White Icon Through Time

“Some of the longest-lived and unquestionably finest
examples of Sancerre.” on Cotat

John Gilman, View from the Cellar

While hardcore Sancerre collectors chase Edmond Vatan’s Clos la Néore for $150 to $200—and Domaine Pinard’s tiny production keeps it virtually unobtainable—François Cotat has settled in as the name for knowledgeable Sancerre enthusiasts.

And for them, Cotat’s cuvée from the unofficial “Grand Cru” of Les Monts Damnés is the domaine’s greatest wine. For purity of expression from this towering, south-facing slope of pure Kimmeridgian rock, it just doesn’t get any better.

This pack gives you the opportunity to secure some truly great vintages: the already scarce 2016 and 2015 along with near impossible to find older years.

If you love the magic of traditionally made Sancerre from its greatest terroir, this is a must purchase.

Almost every serious white wine appellation in France has one legendary vineyard, capable of producing reference-point wines and that “ah-ha” moment for even the most skeptical of palates.

From Le Clos in Chablis, to Château-Chalon in the Jura, to Le Montrachet in the Côte de Beaune, these hallowed hectares are standard bearers for the region, due to the perfect situation of their climats.

And in Sancerre, its Les Monts Damnés, the sole terroir Edmond Vatan deemed worthy of his efforts and the only location in the appellation pursued by Didier Dagueneau.

As Cotat, Vatan and Dagueneau have always been well aware, what makes Les Monts Damnés rise above all other Sancerre lieux-dits is its astonishing exposure and the arching, nearly vertically-steep slope of pure terres blanches soil that gives the site its “damned mountain” name.

From his old Les Monts Damnés vines, the reclusive, humble Cotat quietly fashions a masterpiece that expresses this hallowed terroir with astonishing clarity. Just like the generations who preceded him, François practices the méthode ancienne: pruning his vines to half the yield of his neighbors, harvesting late for full ripeness and aging his wine in ancient neutral foudre before bottling without filtration.

The results are some of the richest, most complex and longest-lived wines in all Sancerre. Yet, even within this noble legacy, the six vintages here stand out for their profound depth, laser-guided minerality and extraordinary expressiveness.

And, this set provides the great advantage of a pair vintages to start enjoying now while saving the legends-in-the-making for the future. Don’t miss it. 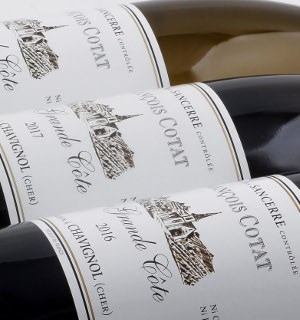 ... a very fresh and vibrant example ... The bouquet is deep, very complex and absolutely superb, as it soars from the glass in a blaze of green apple, oranges, fresh-cut grass, beautifully complex, chalky minerality, lime zest and spring flowers in the upper register. On the palate the wine is deep, full-bodied, complex and absolutely refined, with great mid-palate depth, crisp acids and brilliant lightness of step on the very, very long, intense and snappy finish. A brilliant high wire act that should drink magically for at least the next two decades.