“The greatest rosé in the Loire Valley, and one of
the two or three greatest dry in the entire world.”

John Gilman, View from the Cellar 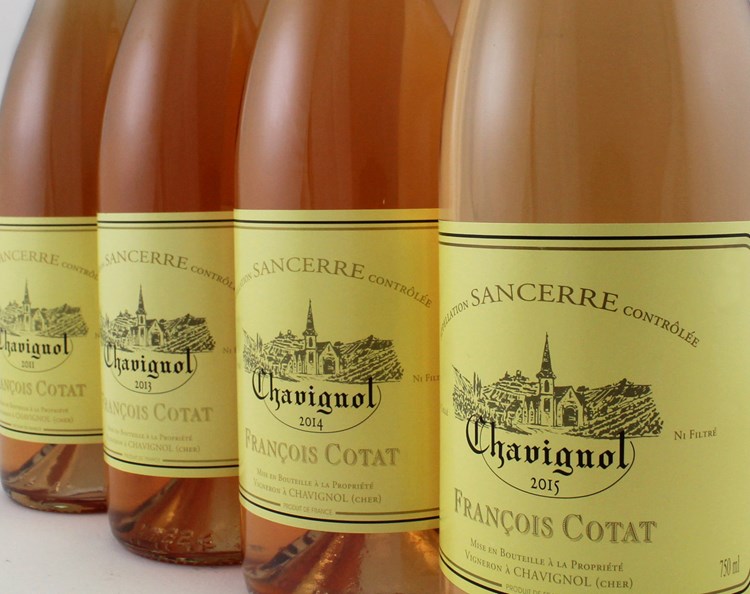 Most rosés are simple thirst-quenchers to drink as young as possible. But the brilliant François Cotat’s Sancerre Rosé is a very different story.

From Cotat’s ancient Pinot Noir vines in Chavignol, it is not only remarkably complex; it is also eerily reminiscent of great Chablis in its chalky minerality and vast aging potential.

For generations, the Cotat family have tended vines planted on Chavignol’s iconic Les Monts Damnés, an extension of the same vein of Kimmeridgian rock that defines Chablis.

And they’ve long known just what to plant where—while the steep upper slope of terre blanches marl is where you find the Sauvignon for Cotat’s peerless Monts Damnés blanc, the lower slope’s caillottes soil, where the Kimmeridgian rock has weathered into pebbles, is ideal for Pinot Noir.

Cotat’s methods have more in common with those of a century ago than those of today—following the skin contact to provide its delicate salmon-pink color and haunting perfume, the rosé is fermented with its native yeasts, aged in large, ancient neutral foudre and bottled unfiltered when François deems it ready.

The results are a thrillingly pure marriage of floral perfume and minerality that, while delicious young, develops soaring aromatic complexity with age.

John Gilman has been outspoken in his advocacy for Cotat’s rosé, calling it “one of the two or three greatest dry rosés in the entire world.”

And it is consistently so. Between its great terroir and François’ thoroughly old school approach, it is a stunningly mineral wine and  a reference point for complex, ageworthy rosé.

The only difficulty is in finding it; François only considers a mere half-hectare plot of his caillottes land suitable for Pinot Noir, and its tiny production is quickly snapped up by those in the know.

We never stop looking, however, and our search has been rewarded with small parcels of the most recent releases from the high-quality, but low yielding, 2015 and 2014 vintages. We’ve also been successful in landing even tinier amounts of the 2013 and 2011.

We’ve assembled these into mixed 6-packs, giving RWC clients a unique perspective on this cuvée’s evolution with time in the cellar.