A Moment in Time

Antonio Galloni on the 2016 The Bedrock Heritage 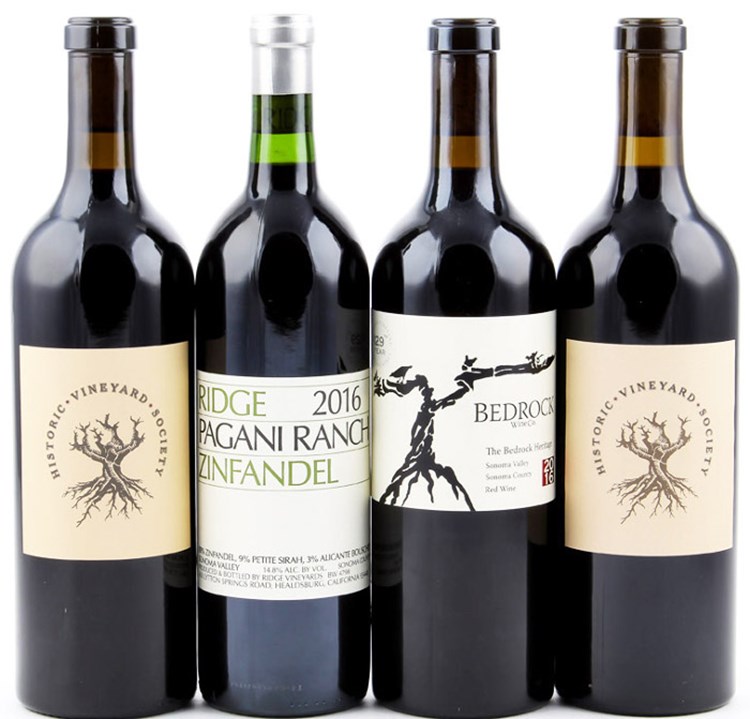 The Historic Vineyard Society (HVS) was founded in 2010 to preserve the state's viticultural heritage. And since the beginning, The Rare Wine Co. has been an ally in that fight. Our latest collaboration is a limited-edition set of four bottles from two iconic vineyards, Bedrock (planted circa 1888) and Pagani Ranch (circa late 1880s).

There are four different wines in the set, and two of them are available nowhere else in the world. The other two wines sport 94 and 95 ratings from Antonio Galloni. With such credentials, the set is a real bargain at just $199.95, with 50% of the proceeds going to support HVS' work.

HVS' work is our best hope for the survival of California's oldest vineyards. And these wines belong in the cellar of anyone who believes, as we do, that great wines are born only of noble terroirs.

Purchasing them will not only let you experience their greatness; it will help to ensure a future for California’s remaining—and irreplaceable—heritage vineyards.

We are proud to partner with them in support of their essential work and hope that after reading the offer below, you will be too.

Whether you start the clock in the 1960s, when Heitz and Ridge came on the scene, or in 1976, when California vanquished France in The Paris Tasting, the modern era of California wine has been both startlingly brief and astonishingly successful. But that success has come at a price.

California’s “Classic” School that turned out so many legendary wines (especially Cabernets) in the 1960s and 1970s, has nearly vanished—the victim of changing weather and technology, and because it lacked the groundswell of support that saved Traditional Barolo and Barbaresco.

But something else has been lost: the countless old vineyards uprooted for housing and shopping centers or grafted over to slake the public’s thirst for Chardonnay and Pinot Noir. Some of the most tragic losses have been to the “mixed black” vineyards planted in the nineteenth century, whose disappearance means not just the loss of vines but of precious genetic material.

Alarmed by these changes, in 2010 five winemakers founded the Historic Vineyard Society (HVS) to raise consumer awareness of California’s oldest vineyards and to document which needed protection.  We supported the society’s birth with an October 2010 offer of members’ old-vine wines and then followed with a larger offer of members’ wines in 2012.

Then, earlier this year, the society told us that, in the 2013 and 2014 vintages, they’d bottled special cuvées—each only 25 cases in size—from the historic Bedrock and Pagani Ranch vineyards. But here’s the twist, each cuvée was created by asking five producers who make wine from that vineyard to contribute 20% of the blend, after having aged their portion in neutral barrel in their own cellars.

Because so little was made (and only in those vintages), HVS asked if we would offer the wines on the society’s behalf, with 50% of the proceeds going to support HVS’ work.

And to make our offer even more compelling, Bedrock Wine Co. and Ridge vineyards contributed their 2016 vintages from Bedrock and Pagani, respectively. This gives buyers the unique opportunity to compare the community bottling with the two most iconic bottlings from each vineyard.

Creating History
Each of the HVS cuvées is a unique portrait of time and place, as seen through the lens of the vintage and the touch of five noted winemakers.

In the case of Bedrock, you have ancient head-pruned vines that are largely Zinfandel, augmented with small blocks of Mataro (Mourvèdre), Carignan, Grenache, Syrah, Petite Sirah, Barbera and Alicante Bouschet. Contributing to the 2013 Bedrock blend were the Bedrock, Biale, Carlisle, Ridge and Turley wineries.

These HVS wines—along with classic Bedrock and Ridge versions—belong in the cellar of anyone who believes, as we do, that great wines are born only of noble terroirs. And purchasing them will not only let you experience their greatness; it will help to ensure a future for California’s remaining—and irreplaceable—heritage vineyards. 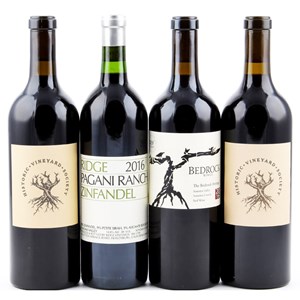 $199.95 4-bottle assortment
50% of the proceeds go to the Historic Vineyard Society

In stock and available for immediate delivery.