“Among the great wines of Italy ... simply a magical bottle. 96 rating.” 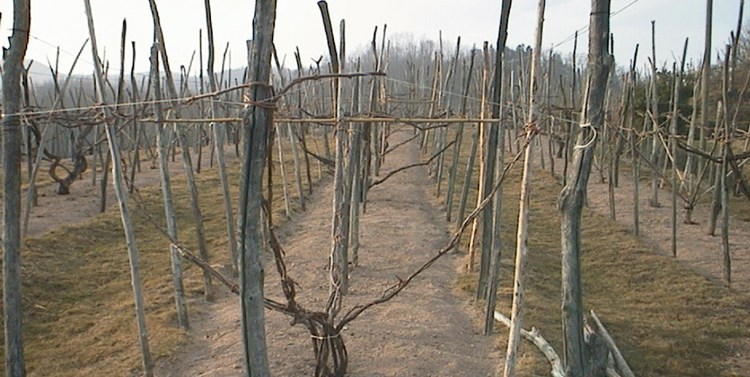 In recent years, among the most exciting developments in Italian wine has been the rediscovery of the magic of Nebbiolo grown at the very foot of the Alps in the Alto Piemonte.

Interest in the region is being rekindled not only by the ongoing work of traditional giants like Vallana, Cantalupo and Sello, but by the efforts of a new wave of dedicated producers. And among the new wines that have drawn the most attention has been Christoph Kuenzli’s 2011 Le Piane Boca.

In the view of Antonio Galloni, its complexity and singular character place it not only among the region’s top Nebbiolos but “among some pretty lofty company among the great wines of Italy.”

Kuenzli, a German wine importer, first visited and fell in love with the Alto Piemonte village of Boca in the 1990s. There he met Antonio Cerri, one of the region’s last remaining traditional masters.

Cerri had spent his life tending his tiny Le Piane vineyard and making fine old school Spanna—as Nebbiolo is known here. But, already quite old and with no heirs interested in carrying on his work, the domaine’s future was uncertain.

Cerri sold Kuenzli not only his cellar and passionately tended vineyards, but also sites that had become overgrown and would have to be cleared of trees and brush to produce again. Today, after years of backbreaking work, he has eight hectares under vine, producing four cuvées, with the flagship the wine named simply “Boca.”

Kuenzli’s “Boca” is sourced from the estate’s oldest plantings—including 50-year-old Traversagna vines and Le Piane itself, planted in the 1920s—all with ideal full-south exposures.

At the Foot of the Alps

Nebbiolo’s magic lies in its expression of site. The grape is, of course, most famously associated with the Langhe, home to Barolo and Barbaresco. But about an hour north is the Alto Piemonte, where you can find the DOCs of Ghemme, Gattinara, Bramaterra, Lessona and Boca.

The climate here is cooler than in the Langhe, and the glacially-deposited soils produce Nebbiolo of greater delicacy and a beautifully floral perfume. It is a different expression of Nebbiolo, but one that is no less fine.

Even within this exceptional region, however, Boca stands out due to its gravelly volcanic soil—which gives the wines their intense minerality—and its 420 to 520 meter elevation, the Alto Piemonte’s highest.

Yet, by the time of Kuenzli’s arrival Boca’s vineyards had dwindled to less than 10 hectares. This is despite the fact that Boca was home not only to Le Piane, but also to the mythic Traversagna, a name revered by connoisseurs of the Vallana Spannas of the 1950s.

The 2011 Le Piane Boca offers compelling evidence that great Nebbiolo is not the province of the Langhe alone. We highly recommend it.