Connecting with Madeira's Past

RWC’s Robert Lenox Madeira, made for us by the gifted Ricardo Freitas, in handblown sealed bottles. Fewer than 200 made. 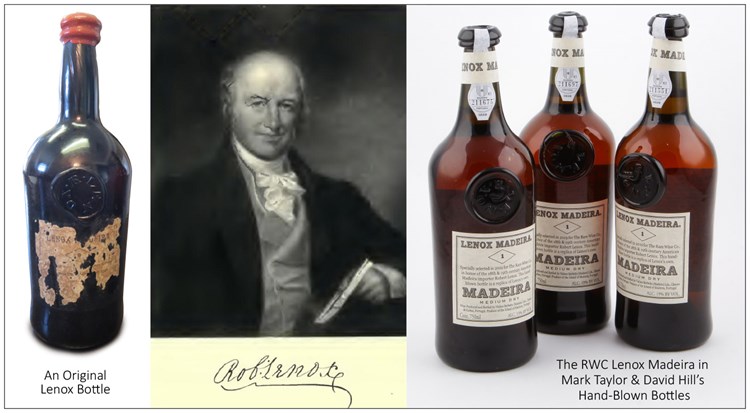 We’ve spent more than 30 years stoking America’s ancient passion for Madeira. And we’ve done lots of amazing offers over the years. But could any compare to this faithful reproduction—not only of the wine but of the bottle—of a wealthy New Yorker’s Madeira circa 1800?

The two-year project took us first to Andover, England; then to the Island of Madeira, and finally back to the U.S. It required the talents of three men unique to the task: Ricardo Freitas, who lovingly created the wine based on historic precedent, and Mark Taylor and David Hill, who’ve kept alive the art of Anglo-Saxon glassmaking from the 18th century back to the Middle Ages.

The result is a fitting tribute to their dedication as well as to Madeira’s unique place in American history.

From the mid-1700s until the Civil War, fine Madeira was synonymous in the U.S. with wealth and privilege. Gentlemen drank little else, and their prized bottles were passed down to their sons as a unique and unbreakable connection to the past.

The best Madeiras were shipped in wood and, while still in barrel, they were delivered directly to connoisseurs. From that point on, each owner did his own thing.

Most of the wine was drawn directly from barrel and consumed that evening. And some was put into massive wicker-covered “demijohns” for long aging in attics. Because glass bottles were scarce and expensive, little Madeira ever found its way into regular-sized bottles.

But Robert Lenox could afford to do whatever he wanted. He was a merchant specializing in Madeira and was for a long time the agent for the famed house of Newton, Gordon & Murdoch. The money he made as an importer was invested in Manhattan real estate, creating a much larger fortune.

By the 1830s, his wealth was only exceeded by that of the Astors and the Whitneys, and his country estate occupied much of what is now New York’s East Sixties and Seventies—an area memorialized as Lenox Hill.

Like few others, he could easily afford to have custom-made Madeira bottles bearing his personal seal. The seals were made as they had been for centuries in England: pressed into a blob of molten glass as each hand-blown bottle neared completion.

Extraordinarily, a number of these “sealed” Lenox bottles—containing Madeira from the 1790s and 1800s—survived in private collections in Albany, New York, and in New Jersey. A few of these bottles appeared in Heublein Rare Wine auctions in the late 1970s. More recently, Lenox Madeiras from Liberty Hall in New Jersey were sold at Christies.

Even empty sealed wine bottles are incredibly rare in America; according to a 2014 study, there are remains of only 651 sealed bottles in U.S. East Coast archaeological collections, the great majority in the South. That Lenox’s bottles survived, still with Madeira inside, is incredible.

Inspired by the Lenox bottles, and with the cooperation of Liberty Hall, we made a plaster cast of one of their Lenox bottles. We then sought out the foremost artisans of ancient hand-blown glass in England, Mark Taylor and David Hill, whose work graces countless historical films and TV shows.

Mark and David took on the challenge of producing 200 faithful, hand-blown reproductions of the Lenox bottle during the summer of 2017. (The final count was 180.) On one of the first few days of production, we were there to film their work. The video, which you’ll find here, shows just how slow and painstaking a process it was.

After completion, the bottles were shipped to Madeira, where Ricardo Freitas was already at work on a Madeira worthy of bottles so unique. His inspiration came from the delicate, yet intense, Madeiras favored by American connoisseurs at the end of the 18th and beginning of the 19th centuries.

To create his masterpiece, he assembled such rare elements as an 1891 Bual, two 60- to 80-year old Tinta Negras, and even a 50-year-old Malvasia from one of his family's priceless old demijohns.

And to give the wine its illuminating acidity, he called on vintage Sercials and Verdelhos from the island's north coast. Now that the wine has had more than two years in bottle, its elegance reminds us why Jancis Robinson once likened Ricardo's Madeiras to Château Lafite. He has once again proven himself Madeira's ultimate craftsman.

Each of these special bottles is sealed in wax, embossed with Ricardo’s grandfather’s "MBV" seal. 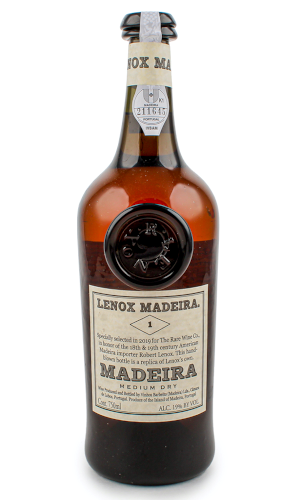