In his 44th vintage, René Rostaing may have made his greatest Classique Côte Rôtie, the 2013. We can offer it, direct from his library, and for far less than any other U.S. source.

“Masses of energy and excitement. A hint of black pepper but really lots of electric fun.”

“[René] may have fashioned the wines of the vintage in 2013 … there are few people doing Côte Rôtie better than this guy.” 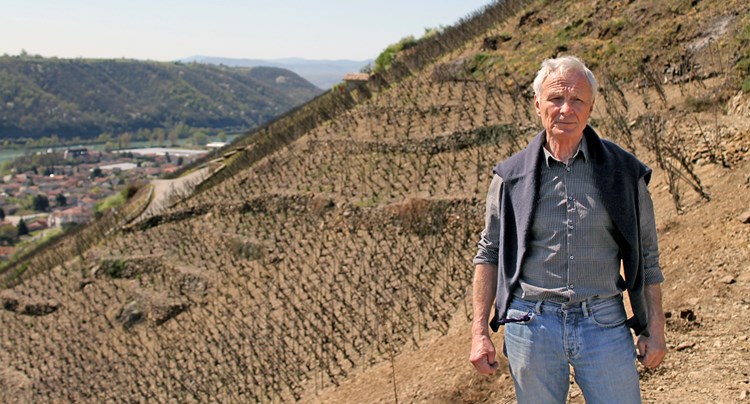 From his first harvest in 1970, René Rostaing’s goal was to create the quintessential Côte Rôtie, with its majestic palate of pure velvet and its ambrosial aromatics of bacon fat, smoke, violet, cassis, framboise and black olive. From 2009 on, he even honored his classic cuvée with the ancient name for Côte Rôtie, “Ampodium.”

Fittingly, if any classique Côte Rôtie of Rostaing’s distinguished career most perfectly captured these qualities, it was 2013, his next-to-last before his son Pierre took over in 2015. If there is any doubt about 2013 Ampodium’s epic quality, the Robinson/Gilman/Dunnuck quotes above should put them to rest.

In the five years since its release, 2013 Ampodium has nearly disappeared from the U.S. market, with only a handful of U.S. listings starting in the mid-$100s. But knowing how much we love this vintage, René has generously shared with us a few cases from his own library that we can offer for just 79.95 a bottle and 450 a 6-pack.

You won’t want to miss this opportunity to own and experience this pure expression of Côte Rôtie's beauty, at a ludicrously low price.

A Bridge to the Past
No other grower of the past half century has been more driven by the conviction that Côte Rôtie should taste like Syrah made nowhere else on earth. And so, just like his ancestors, René fermented his fruit with a high percentage of whole clusters, and he minimized his use of new wood for aging, eventually moving towards larger barrels.

The sites from which Ampodium is assembled represent some of Côte Rôtie’s most noble terroirs. But they are also of great historical importance, having once produced the legendary Côte Rôties of René’s uncle Marius Gentaz, his father-in-law Albert Dervieux and his grandfather Jean-Marie Buffen.

The Planets Align
A relatively cool summer in 2013 reminded growers of the 1980s. Yet, there was one huge difference: 2013’s brilliantly warm and sunny September turned an average year into a great one. The only downside was tiny production, with René making fully one-third less wine than usual.

But as so often happens, reduced volume results in elevated quality. In fact, Jeb Dunnuck has written that René “may have fashioned the wines of the vintage in 2013.” But don’t just take Jeb’s word for it. A few years back we double-blinded RWC founder Mannie Berk and Pingus winemaker Peter Sisseck on four top 2013 Côte Rôties, including Jamet (which today sells for $200). The clear favorite: 2013 Ampodium.

The reasons are clear.  The nose is a captivating mix of all the classic Cote Rotie notes, with violet, black pepper, mint and bacon fat taking center stage. It’s a glass of wine that you could keep sniffing all night. On the palate, there is a perfect balance between all elements, and the tannins, while ripe, are long and silky. It is a total seduction and in style comparable to the great 1991 Côte Rôties.

We have only a small amount of this wonderful Côte Rôtie to offer from René’s library at this price. So, you’ll want to hurry.

“… an absolutely classic bottle of young Côte-Rôtie … a marvelous blend of raspberries, pepper, spiced meats, stony soil tones, woodsmoke, a nice touch of stems and a topnote of violets. On the palate the wine is pure, full-bodied and gorgeously soil-driven … This is utterly superb … Drink between 2020 – 2050.”

“… masses of energy and excitement. A hint of black pepper but really lots of electric fun”

“… gorgeous … terrific notes of black raspberries, blackberries, crushed violets and dried flowers in a surprisingly forward, nicely concentrated, textured style that can be enjoyed anytime over the coming decade or more … I was blown away by the depth and richness (his 2013s) showed. There are few people doing Côte Rôtie better than this guy.”