History in a Bottle.

“A magnificent wine … despite its striking intensity, it remains remarkably weightless and elegant. 100 rating.”

Over the past decade, Barbeito’s Ricardo Diogo Freitas has earned a reputation as Madeira’s master blender. In fact, he has almost single-handedly restored what had been a dying art on the island, weaving together disparate wines to create pure magic in the bottle.

But Ricardo’s masterwork was yet to come. Its story began in 1985, when his grandfather Mario passed away, leaving Ricardo’s mother Manuela his personal stock of ancient Madeira in both barrel and bottle. Over the next year, Manuela transfered most of the wine into glass demijohns (ranging in volume from 15 to 45 liters) so that the wines, some of which were more than a century old, could continue to age gracefully, insuring their immortality.

Bottles and casks of the same wines were blended together. And as exact vintages were often unknown, only their estimated age was recorded.

Fast-forward to this year. Early this summer, with the pandemic swirling around us, we were discussing with Ricardo how to honor the 25th anniversary of our collaboration that began in 1995. We came up with the idea of creating a Madeira of great age and power, the likes of which has not been made since perhaps the 19th century. And to accomplish this, we would draw on his mother’s priceless demijohns of Malvasia.

After weeks of tinkering, Ricardo ended up blending four demijohns of old Malvasia, with an average age of 120 years. Two of the demijohns date from about 1905, having spent some 80 years in barrel and 35 years in demijohn. But two of the demijohns are far older, dating to the 1870s. Ricardo believes the wine in those two demijohns is the famous Barbeito 1875 Malvasia. The final blend was 100% from the four demijohns, without a drop of wine from elsewhere.

When all was said and done, a total 192 bottles were filled with this irreplaceable nectar.  Very limited, of course. 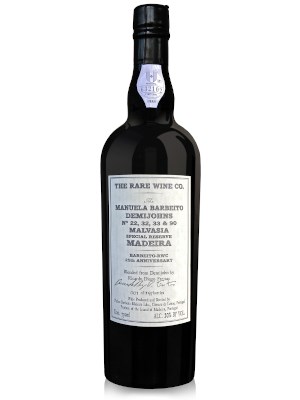 “A magnificent wine that unwinds in the glass with aromas of dates, warm spices, beeswax furniture polish, dried fruits of all kinds, aromatic barks and bitter honey, it's full-bodied, satiny and multi-dimensional, with an immensely layered and searingly concentrated core, racy acids and a long, sapid and resonant finish. Despite its striking intensity, it remains remarkably weightless and elegant. Since only 180 bottles were filled, this review may strike readers as more of a provocation than a useful purchasing suggestion, but I'm afraid the wine deserves it.”