Helping One of the Good Guys. 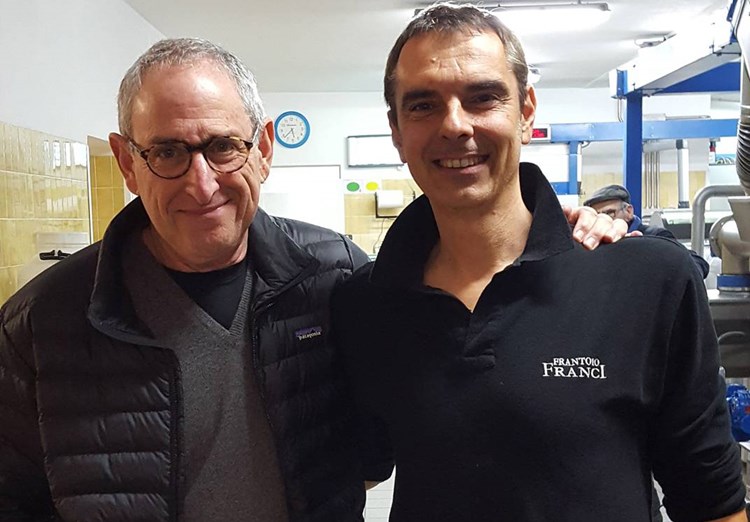 In addition to what we see around us and in the news every day, people are being hurt by the COVID-19 crisis in ways that would never occur to us. A case in point is how it’s affected olive oil producers in Europe.

On Friday, we had a Zoom meeting with Giorgio Franci, who's pictured above with Mannie Berk in 2017. As most RWC clients know, Giorgio is Italy’s most revered olive oil grower. In fact, his top oil, Villa Magra Grand Cru, just got Gambero Rosso's highest rating for the tenth year in a row. It was also judged the finest single-variety oil in all of Italy (as it usually is).

We learned from Giorgio that, with virtually every restaurant and hotel in Italy closed, a large part of his 2019 production is still in his cellar. Each year, most of his output gets earmarked for Italy’s best restaurants and hotels, who take the oil in batches throughout the year. January and February started out great—promising to be Giorgio’s strongest year ever. But once March arrived, everything stopped.

Most Tuscan oil producers are primarily winemakers, with oil something they do out of passion and tradition. But for Giorgio it's his sole business—a year-round enterprise with many workers and their families dependent on him. He’s justifiably worried.

Fortunately, we have a temperature-controlled container scheduled to leave Italy in 10 days, and so we offered to get the word out to our clients and to subsidize the price of this year's two top oils in a mixed six-pack.

For all orders received by tomorrow, we can have them on this container, which is scheduled to arrive by late June. You will not only be supporting arguably the most dedicated olive oil producer on the planet; you’ll be getting his two greatest (and hardest-to-obtain) oils at incredible prices.

We encourage you not only to buy these for yourself;  buy extra oil for your friends and colleagues. Make them insiders on how transcendent olive oil can be. (You'll find some great recipes using Franci oil at their website here.) And come to the aid of someone who’s done more than anyone else to raise the quality of olive oil in Italy.

The offer resonated with a large number of RWC clients, and we tore through an incredible 600 cases of oil in just a few hours, which included every bottle of Villa Magra Grand Cru remaining in Giorgio's cellar.