We've noticed you're on the RETAIL site when WHOLESALE is your selected preference. Change your preference?
Lazio 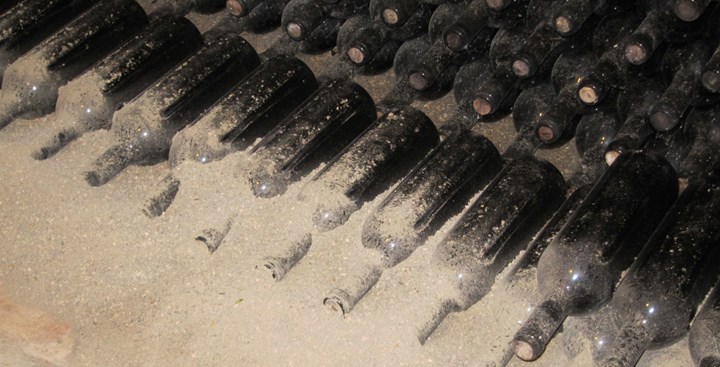 It begins with three growers famed for their obsessive commitment to the indigenous grapes of their region, as well as to their individuality in expressing them. These men are Valentini, Gravner, and Miani.

But over the past 30 years, a fourth, far more obscure producer, Antonio Pulcini, has quietly been turning out white wines of similarly mind-bending complexity. The obscurity of Pulcini’s wines is in part due to his reclusiveness and how he chooses to sell his wines, exclusively from the cellar door of his estate, Colli di Catone. (He has long eschewed importers and critics.)

Pulcini works in an ancient villa overlooking Rome, whose 2000-year-old, catacomb-like cellar features a 300 A.D. Christian altar. The villa itself once belonged to the sister of Trajan—the Roman Emperor in the century after Christ’s death. And in the 1940s it housed Orson Welles and Tyrone Power, when they were filming on location in Rome. More relevantly, the villa is surrounded by vineyards planted on southwest-facing slopes of volcanic tufa soils; sites rich in minerals and prized by the ancient Romans.

As one peels back the layers, the compelling character of Pulcini’s wine begins to emerge. Despite a 20th Century spiral into mediocrity, the wines of Rome’s southern hills had once ranked among the finest in Italy. Like Prince Boncompagni Ludovisi at the nearby Tenuta di Fiorano, Pulcini aimed to craft wines that honored that history. He longed to make the kind of structured wines that could live for decades.

Unlike Fiorano, where non-native varieties were introduced, Pulcini chose to focus on indigenous white varieties that once made the region famous. And so, over 30 years ago, he tore out most of his modern Trebbiano and Malvasia di Candia, and today focuses on the ancient varieties, Malvasia del Lazio (a/k/a Malvasia Puntinata) and Grechetto (a/k/a Greco Bianco). Malvasia del Lazio was long recognized as the region’s greatest historic variety; cherished for its wines’ minerality and ageability. Grechetto – unrelated to the Umbrian variety of the same name – was also prized for its minerality and lemony zing.

Pulcini makes an array of wines, but the best introduction to his style is his rendition of Frascati Superiore. He incorporates 40% Malvasia del Lazio into the conventional blend of Malvasia Candia and Trebbiano, and even these latter two varieties gain added character through his fastidious viticulture and famously low yields – less than half the legal limit. In his hands, this DOCG of often frivolous whites offers superb character and minerality.

Pulcini’s top site is the Colle Gaio vineyard, which has long been recognized locally as the viticultural Crown Jewel of the Castelli Romani hills. Here, more than 30 years ago, he planted Malvasia del Lazio; believing that this low-yielding native variety would give him the ageworthy wines he was looking for. And, the resulting wine has become his magnum opus, “Colle Gaio 'The Old White'.”

For, while the yields for all his wines are low, those of Colle Gaio average a mere 20hl/ha; achieving the concentration of grand cru White Burgundy. The wine spends three to four days on the skins prior to pressing and the fermentation proceeds slowly; often lasting up to four months. He then leaves the wine on its lees in stainless tanks for three, four or even more years until he feels the wine is ready to be bottled. And, the wine is then left to slumber in bottle, sometimes buried in sand, for years or decades in the estate’s labyrinthian cellars.

Though superbly balanced, and boasting a wondrous acid spine, the most exciting trait of Pulcini’s Colle Gaio is the minerality and otherworldly tertiary aromas that he coaxes from this noble terroir. While one vintage may be Riesling-like in its complexity, another may resemble Chablis in its minerality. Another vintage may exude orange marmalade, while another intrigues with its intense scent of gun smoke.

Though always made by the same methods, the same grapes and the same terroir, these wines are not only a study in vintage subtleties, they demonstrate with remarkable clarity how profoundly white wine can develop with time in bottle. And, they further demonstrate just how relevant the wisdom of ancient wine traditions can resonate in our modern time.