We've noticed you're on the RETAIL site when WHOLESALE is your selected preference. Change your preference?
RIOJA

CUNE is among Rioja’s most venerable houses, founded in 1879 as Compañia Vinicola del Norte de España—abbreviated as C.V.N.E. or CUNE—by brothers Eusebio and Raimundo Real de Asúa of Bilbao. And it remains in family hands to this day.

Like other early bodegas, CUNE had French connections—to Champagne producers in Reims as well as to the Cognac house Remy Martin. From the beginning it was based in Haro’s famed Barrio de la Estación, taking advantage of the railway line as a convenient means of transporting their wines.

While originally a negociant, the Real de Asúa brothers soon began acquiring vineyards, recognizing that controlling production from vine to bottle was the path to high quality. And they quickly demonstrated their success, winning numerous medals at the major European exhibitions taking place at that time.

This reputation carried the bodega for more than a century. However, by the beginning of the twenty-first-century, new energy was needed. That energy came from fifth-generation descendent Victor Urrutia who arrived in 2003.

Under Victor, CUNE has seen a surge in quality across the entire range of wines, from Crianza to Gran Reserva. But as John Gilman has pointed out, Victor has not only managed to raise quality, he has done so while doing “an absolutely admirable job of maintaining Cuné’s great traditions.”

A half century after its birth, CUNE conceived Viña Real Gran Reserva and Imperial Gran Reserva to be the twin pinnacles of their offerings. As Spanish wine authority Luis Gutierrez has written, that pair of wines has established “CVNE as one of the great bodegas not only of Rioja, but of the whole of Spain.”

These wines are equally superb expressions of CUNE’s classicism, they also represent different styles and terroirs. In its refined elegance, Imperial has always been the essence of Tempranillo, complemented by Graciano and Mazuelo, from the Rioja Alta subzone, particularly the area around the village of Villalba. The wine is named from the pinta imperial, or imperial pint, a size exported to the UK in the early years.

Meanwhile, the fuller-bodied Viña Real is sourced from sunny, south-facing slopes in Rioja Alavesa, the subzone across the Ebro River to the north. It gets its name from the fact its vineyards are clustered around the Camino Real (“Royal Road”) in Alavesa’s Elciego.

From the late 1940s until the late 1970s, both wines enjoyed a Golden Era, highlighted by such iconic releases as 1964 Viña Real Reserva Especial and 1970 Imperial Gran Reserva. But the best may be yet to come, as each cuvée enters a new period of greatness, under Victor’s leadership.

Today’s Viña Reals and Imperials have wonderful texture and perfume and promise a very long life, much as their predecessors did. And while both continue to be fashioned along the classical lines that made them so iconic, the Viña Real wines also benefit from a new winery dedicated solely for its production.

From its huge cedar barrel-shaped vinification building, through its gravity-only movement of wine, to its natural caves for bottle aging, it is designed to express Viña Real’s exclusively Rioja Alavesa grapes as purely as possible.

Real de Asúa was created as a tribute to the founders of the winery, the Real de Asúa brothers. It is a meticulous selection of grapes from CUNE’s best vineyards in the towns of Villalba and Haro. After fermentation in oak vats and a long 5-week maceration, the wine sees far less time in wood than does Imperial Gran Reserva. Befitting its calling, it is made only in great years when the fruit material warrants it.

Pagos de Viña Real is a special selection of grapes from around CUNE’s new Viña Real winery between Laguardia and Logroño. In other respects, it mirrors Real de Asúa: made only in top vintages, and in tiny volumes, and with similar winemaking and aging.

It will be fascinating to watch how both wines involve into maturity.

If you go back 50 to 100 years, you’ll find that CUNE also made one of Rioja’s most illustrious whites:  Monopole. First made in 1914, it was the first prestige cuvée created by CUNE, predating both Imperial and Viña Real. Monopole was not only great, it was unique: a blend of 95% Viura and 5% Manzanilla from the Sherry region, aged in large neutral barrels.

But as Spanish drinkers began to demand more modern whites in the 1980s, CUNE changed the Monopole blend, removing the Manzanilla, and switching to stainless steel to create a fresher, simpler and less expensive white.

Fortunately, in 2014 (celebrating the anniversary of its birth) Victor decided to start making the “original recipe” again, calling it Monopole Clasico.

To advise the winemaking team, CUNE reached out to Ezequiel Garcia, the legendary winemaker who’d made the bodega’s wines from 1959 to 1973, and who was possibly the last person alive to know exactly how it was made.

Monopole Clasico is, in the words of The Wine Advocate’s Luis Gutierrez, made “the way Monopole was always produced decades ago.” And the wine has been a sensation, drawing such praise as John Gilman calling it “one of the most unique and compelling white wines I have tasted from the Rioja region.”

As in the past, Monopole Clasico is a selection of CUNE’s best Viura, gently pressed and then settled in concrete tank, followed by fermentation in stainless steel and aging with the lees in large neutral oak barrels for eight months.

This approach produces classically rich and creamy textured white Rioja, but what makes Monopole Clásico unique is the addition of a small amount of Manzanilla Sherry, purchased from the great Hidalgo family in Sanlúcar de Barrameda.

Rioja evolved a style of wine unique in the world. Today, the survival of this style is in jeopardy. Press 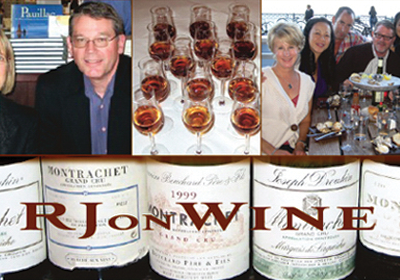 One of the grand old names of Rioja, Riojanas has produced heroic wines since its founding in 1890. PRODUCER

La Rioja Alta is a traditional Rioja icon—for more than a century, one of the region’s greatest producers. Event