We've noticed you're on the RETAIL site when WHOLESALE is your selected preference. Change your preference?
DOURO

“João Brito e Cunha is increasingly a go-to source for Touriga Nacional and Touriga-dominated wines ... a star who doesn’t get enough attention … as good as it gets in Douro.” Mark Squires, Wine Advocate

It’s as true in the Douro as it is in Côte Rôtie and Barolo—noble wines require noble terroirs.

Nobody knew this better than the 19th century “Grande Dame of the Douro,” Dona Antónia Adelaide Ferreira. As Stephen Spurrier has written, “Dona Antónia believed that quality was the only route to success and so created and invested in some of the best Quintas in the Douro, at one point owning more than 20, including great names such as Porto, Seixo, Vargellas and Vesuvio.”

Today, Vargellas and Vesuvio are hallowed ground for Port aficionados. And now, following the lead of the first world-class unfortified Douro red, Barca Velha, some of the region’s greatest Quintas are not only producing incredible fortified wines, but amazing red ones as well.

And, some of the most extraordinary Douro reds of all are being made by none other than Dona Antónia’s great-great grandson, João de Brito e Cunha of Quinta de S. José.

From his modestly priced Tinto to his top-of-the-line Grande Reserva and Ruy Francisco, João's wines have received great press on both sides of the Atlantic.  And his 2017 Grande Reserva recently won the Prémio “A Escolha da Imprensa” (“Choice of the Press” Prize) for top Portuguese red, beating out 677 other wines.

As a result, Quinta de S. José enjoys a cult following in its homeland, and the wines have rarely been available here, or anywhere else outside of Portugal. And so The Rare Wine Co. is privileged to be able to direct-import João’s top wines.

A Noble Legacy
João Brito e Cunha was destined to make great Douro wine, the latest generation to uphold one of the region’s greatest winemaking legacies. His great-grandmother Dona Antónia almost single handedly transformed the region, described by Spurrier as “a much loved and admired character within the Port trade, continually driving innovation as well as providing much needed support to the Douro families.”

It is fitting that the region’s pioneering non-fortified wine, Barca Velha, is sourced from the Quinta da Leda, another one of Dona Antónia’s many great vineyards, and emerges from the house named in her honor, Casa Ferreirinha.

João’s grandfather was also a highly regarded figure in the Douro as one of the region’s great winemakers, first with Ramos Pinto and Romariz, followed by thirty years as technical director  of Real Companha Velha and finally as a consultant for Taylor Fladgate.

It follows that João’s father Ruy grew up steeped in Port. His childhood home at harvest time was the centrally located Quinta do Corval in Pinhão, from which his father could oversee the picking at the many Real Companha vineyards throughout the Douro.

An Extraordinary Terroir
So, when the time came for the next two generations to make their own wines, Ruy and João searched for a Douro vineyard with the right soils and exposures to produce balanced, fresh and complex red wines.

They found it in the Quinta de S. José, a spectacular north-facing, terraced slope of blue-grey schist towering over the Douro on its south bank, in the heart of the central Cima Corgo subregion, home to the majority of the Douro’s most storied sites.

The quality of the terroir was evident not only in the S. José slope itself, but also by that of its close neighbors. It lies adjacent to the historic Quinta do Roriz, from which the Symington Family and Cos d’Estournel’s Bruno Prats make Chryseia, one of the region’s top reds.

And, across the river is Christian Seely’s famed Quinta da Romaneira, source of one of the earliest single-origin Vintage Ports in the 19th century, and a terroir particularly well suited for non-fortified wine as well.

Quinta de S. José’s steep slope is planted with Touriga Nacional and Touriga Franca vines, the Douro’s finest red grape varieties, some of which are very old. Joã0—who followed his enology degree with stints in Champagne, Australia and Oporto—makes rich but elegant wines from them, purely expressive of this extraordinary terroir.

In addition to a lovely white wine and a small amount of Vintage Port, João makes five red cuvées, in ascending order of complexity, depth and ageability: Tinto, Touriga Nacional, Reserva, Grande Reserva and Ruy Francisco. While all the wines are from the estate’s own vineyards, the Grande Reserva is from the property’s oldest vines. Only 330 to 400 cases of Grande Riserva are made per vintage, and it isn’t made every year. There was no 2016 Grande Reserva, for example.

The top wine, Ruy Francisco, is dedicated to João’s father and is based on a single parcel of old vines. Of these vines, The Wine Advocate’s Mark Squires has quoted João as saying: "During our wine tastings for many years, (it) was always the one on the top, showing strong distinctiveness ... and character, with very deep and ripe tannins and pure fruit." To this magnificent old-vine fruit is added a field blend of native red varieties. Production is tiny with between 125 and 200 cases made per vintage.

The Quinta de S. José wines are not only among the very finest Douro reds being made today, they are beautiful expressions of terroir that more than uphold the legacy of one of the region’s great wine families. It’s a privilege to make them available in the United States. 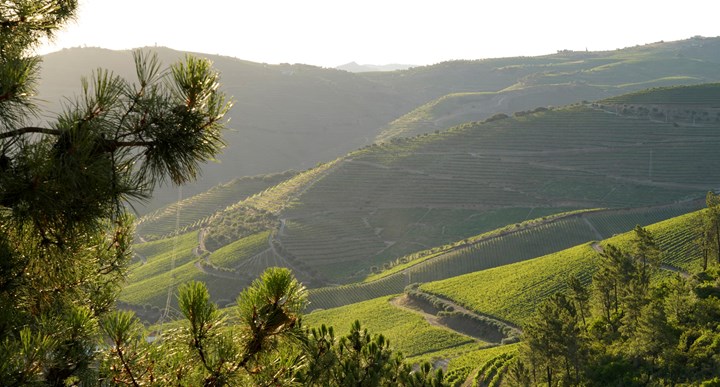