We've noticed you're on the RETAIL site when WHOLESALE is your selected preference. Change your preference?
NORTHERN RHONE

For a millennium, Cornas has been one of France’s viticultural jewels, its wines expressing themselves powerfully, yet achieving a remarkable silkiness with age.

And for much of that time, there were members of the Michel family making it. Their history as Cornas growers goes back more than 400 years, and Robert’s father Joseph was a pioneer of domaine-bottled Cornas in 1956.

Robert succeeded Joseph in 1975, and for the next three decades—until his retirement following the 2006 vintage—he was the very definition of an old-school Cornas vigneron, the last of ten generations of tough men working impossibly steep sites for the reward of the aromas and flavors that only Syrah grown here can express.

He began working in the family vineyards in the early 1960s, while still a teenager, and he took charge of the domaine at age 29. Along with Jean Lionnet, he was one of only two in his generation to continue with his family’s work. This was, after all, when the young men of Cornas were abandoning its vineyards for easier, more financially rewarding work in the cities.

Robert’s belief in Cornas led him not only to continue the work the vines, but to expand his production. Growers who’d abandoned their vineyards were astonished by his willingness to clear a site that had become en friche—overgrown with trees and brush.

He also had to contend with real estate developers who sought to make money off the vineyards’ beauty and views. But, ultimately, Robert, and his fellow leaders Auguste Clape and Alain Voge, prevailed in their opposition, and the vineyards survived.

By the time of Robert’s retirement, the amount of land he worked had increased more than five-fold, from the 1.5 hectares his father farmed to his eight.

From these twenty acres of vines, Michel made two wines. Cuvée des Coteaux came from his vines in the great lieux-dits of Chaillot, Reynards and Tézier. Meanwhile, La Geynale, was a prized sub-cru high up the Reynards slope with vines planted by Robert’s grandfather in 1910.

His winemaking was as traditional as his father’s, featuring lengthy whole-cluster fermentations and aging in neutral demi-muids and pièces. Yet, his deep familiarity with his terroirs, and their differences, taught him flexibility in order to get the best expression from them.

As he explained to John Livingstone-Learmonth, “Reynards, especially La Geynale, gives wines that are elegant and contain a lot of spice, with good tannins. That is why I do not destem that crop."

But he did partially destem Chaillot, explaining that “Chaillot, where I have my younger vines dating from 1978, gives wines that are rich, but their tannins are rather tough, and if not destemmed, can be a little hard."

While Robert handled their fruit differently, both La Geynale and Cuvée des Coteaux  are the real thing. Traditionally made and utterly pure in the expression of their terroirs, they capture the very soul of Cornas. They are powerful yet elegant, very long-lived, and with aromatics that could come from nowhere else on the planet.

California's oldest vineyards are finally being recognized for the viticultural treasures they are.

The Golden Age of Côte Rôtie and Cornas 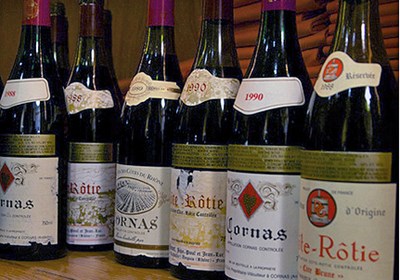