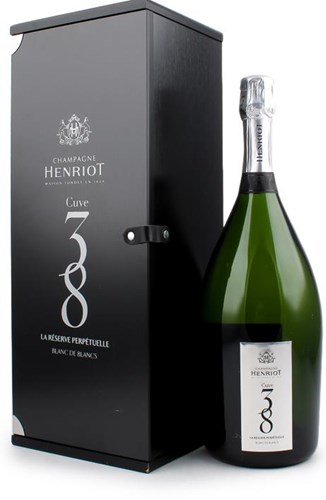 The original 2014 release of Henriot's Cuve 38 introduced one of the most compelling Grande Marque luxury cuvées of our time. And with only 1000 magnums, and no bottles, made, it also announced one of the rarest.

Antonio Galloni: "95+ rating ... a real knock-out. The Cuve 38 is a perpetual reserve of the house's best Chardonnay from the Grand Cru villages of Mesnil-sur-Oger, Chouilly, Avize and Oger. Lifted and precise, with the cut of a jewel, the Cuve 38 impresses with its energy and tension. Lemon oil and a host of citrus-inflected notes appear first, followed by white pepper, mint and floral notes."

Decanter: "97 rating. Not the first time I’ve witnessed the otherworldly freshness that can be sustained by annually refreshing a grand old solera, but I was stunned by the unbridled joy of youth radiating from this glass."

John Gilman: "96 rating ... absolutely brilliant. The wine is comprised of a solera blend from the 1990 to the 2007 vintage, when the first thousand magnums’ worth of vins clairs were drawn out of the solera ... The wine is absolutely brilliant on both the nose and palate ... While this wine is an utter joy to drink today, it shows no oxidative elements of tertiary development and will unequivocally age and improve for decades to come. An utterly stunning new addition to the firmament of Champagne’s greatest bottlings!"

Other Wine by This Producer