“Chianti Classico: The Complete Atlas of the UGA Vineyards is a hundred years ahead of its time. It is one of the most far-reaching and historically significant texts ever written about wine and certainly about Italian wine.” Antonio Galloni, Vinous.com

Alessandro Masnaghetti's quest to unravel the terroirs of Italy has taken one step further, with the forthcoming publication of his nearly 500-page book on Chianti Classico.

But as Antonio Galloni’s review, published on Vinous.com, argues, Chianti Classico: The Complete Atlas of the UGA Vineyards is an even greater accomplishment than Alessandro’s previous works, given how little information was previously available to us on the vineyards of Chianti. Antonio calls it “Alessandro’s masterpiece; it is his Sgt. Pepper’s Lonely Hearts Club Band, his Kind of Blue, his The Wall.”

Antonio goes further, calling the book’s publication “a seminal moment for Italian wine … the first definitive text on Chianti Classico. There are only a handful of people, producers included, who possess this knowledge, but only one person who could put it all together. It's a book that instantly elevates the reputation of Chianti Classico and places it among the elite wine regions of the world.”

The timing of the book is perfect, given not only Tuscany's rising importance, but also all the changes that are occurring with respect to labeling. (One good example is new Gran Selezione category that's proving so confusing to our clients!)

Alessandro has also stepped in at just the right moment to guide us through Chianti's new UGAs, which are similar to, but also quite different from, Barolo's MGAs.

As the Tuscan authorities work to rationalize how Chianti Classico is divided, we will be seeing a whole new set of names applied to different areas of Chianti. Alessandro will not only explain the different areas, he will provide his usually detailed maps, including who owns what vineyards.

Finally, this book was much needed, given how little most of us know about Tuscany's terroirs and their relationship to wine styles and quality.  Like Champagne and Rioja, Chianti Classico until recently was largely about brands. Terroirs were seldom discussed and not at all understood. Alessandro's new book promises to change that.

In the depth and breadth of the information, Chianti Classico: The Complete Atlas of the UGA Vineyards parallels the brilliance of Alessandro's books on Barolo and Barbaresco.

This First Edition will arrive in the U.S. early next year and is a must-buy for anyone with even a passing interest in the wines of Chianti Classico. 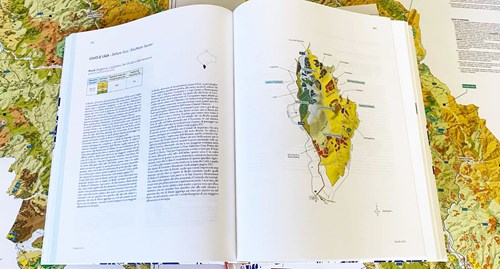 Chianti Classico: The Complete Atlas of the UGA Vineyards is the world’s first book devoted exclusively to Chianti Classico as a territory, its communes, its vineyards, the future Unità Geografica Aggiuntive (UGAs) and the style of wines produced in them. It's the result of 15 years of field work by Alessandro, as well as three decades of tasting.

The book begins with a full history of the region's wines, especially since the 1960s, which has been a time of revolution and upheaval, thanks to the advent of Super Tuscans and changing grape varieties and winemaking.

The biggest part of the book (some 250 pages) is devoted to the UGAs, with a mountain of written information and multiple maps of each area.

As with his previous books, there is a complete index of producers, with area under vine, location by UGA, and red wines produced.

In total there are nearly 500 pages, with approximately 180 maps.

As Alessandro's sole U.S. agent for his European maps and books, we're pleased to offer media mail-paid copies of his new book at our special pre-publication price. Expected arrival early 2023. 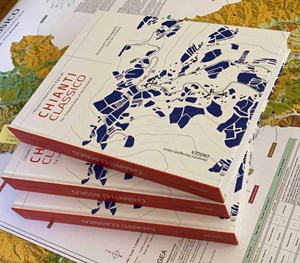