For 45 years, until his death in 2004, Giovanni Conterno forged a reputation as perhaps the greatest of all Barolo producers, irrespective of style. The wines he made were the quintessence of “traditional” Barolo: rich, powerful, massively structured, and capable of long development in bottle.

For many, his heroic Monfortino—the product of wild temperature swings during fermentation and 6 to 8 years in barrel—is the most perfect expression of the Nebbiolo grape. As for his glorious Barolo Cascina Francia, it has long been the benchmark against which other producers measure their own efforts.

Giovanni left the world many great vintages of Barolo, including 1964, 1971, 1978, 1985, 1990, 1996, 1999 and 2001. But possibly his greatest legacy was to hand over his important work to his gifted son Roberto. A brilliant winemaker in his own right, Roberto not only shares his father’s gifts but is equally determined to uphold his family’s traditions. He could have followed other young Langhe winemakers into modernism, but he never will. In his words, the wines of Giacomo Conterno will always belong to the generations that came before him.

The Conterno crown jewel, Monfortino, is not only arguably the greatest Barolo; it was also the very first Barolo made in what has come to be known as the classic style.

At the time that Giovanni Conterno’s father Giacomo served in World War I, Barolo was generally sold in either cask or demijohn, meant for early drinking. But when Giacomo returned from the war, he decided to create a Barolo with immense aging potential. His first wine was a 1920 Barolo Riserva, and he soon adopted the name Monfortino in honor of his home village Monforte d’Alba.

For the next 54 years, Giacomo—and then his son Giovanni—made Barolo in much the same way. Two Barolos were made, always from purchased grapes, the main distinction being fermentation technique and time in cask.

“The wines produced by Giovanni Conterno are monuments to Nebbiolo as well as to the glory of Piedmont.”

Then, in 1974, Giovanni acquired the Cascina Francia vineyard in Serralunga. With its fabulous exposure, the site was perfect for the powerful Conterno style, and Giovanni immediately stopped buying grapes, relying on approximately 9 hectares of Nebbiolo to produce on average 600 cases of Monfortino and 1500 cases of Cascina Francia. Cascina Francia also held 5 hectares of Barbera, giving Giovanni the material to produce one of the Langhe’s finest, and most sought-after, Barberas. [An Italian law change required that Cascina Francia be renamed simply “Francia” with the 2010 Barolo vintage.]

Two thousand eight marked a new milestone for Giacomo Conterno, when Roberto, was able to purchase land in the prized Cerretta vineyard. Roberto chose to increase his holdings in the commune he knows best—Serralunga d’Alba—home not only to his iconic Francia vineyard, but also to other legendary crus like Rionda, Gabutti and Arione.

In the Ceretta cru, Roberto acquired two hectares of Nebbiolo and one of Barbera. Roberto’s new wines from these plots have rapidly become as sought-after as his wines from Francia.

An even greater coup occurred in 2015, when Roberto was able to acquire virtually all of the Arione cru. Adjacent to Cascina Francia, it shares similar soils, but may have an even better southern exposure. Bruno Giacosa helped to make Arione legendary with a series of great Barolos in the 1970s.

With the acquisitions of Cerretta and Arione, Roberto has made an indelible stamp on this storied estate. Yet, the subtly of his work in the winery and vineyards may be too easily overlooked.

The vineyards today are some of the most immaculately tended sites in the Langhe, and the winery is almost impossibly clean and focused. Roberto has not been afraid to invest in modern technology either, though modernity is embraced only where it allows Roberto to do the same work better. Examples include better sorting and and gentler destemming equipment, plus a state-of-the-art bottling line to assure the Conterno magic gets into the bottle intact.

Yet, what's really important are his family's winemaking traditions, and they remain unchanged. The extended fermentations would be recognized by his grandfather. Like his father, Roberto is patient in raising his wines. Consequently, the period from harvest to release is two years for his Barberas, four years for the Baroli, and approximately seven years for Barolo “Monfortino.” 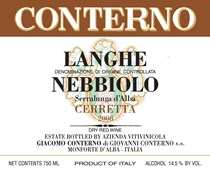 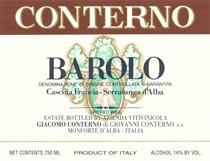 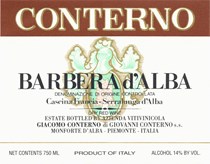 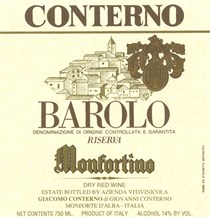 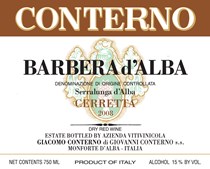