My first visit to Anselme Selosse’s cellar was on January 17, 2004, and now, nearly six years later, I haven’t forgotten the feeling of awe I had that day.

In a region not known for breaking down barriers, here was a winemaker born not only to question dogma, but to use his extraordinary gifts to produce wines the likes of which have never been seen before. It quickly became clear to me why he was his region’s most celebrated winemaker—and why so many observers were saying that he was changing the face of Champagne. 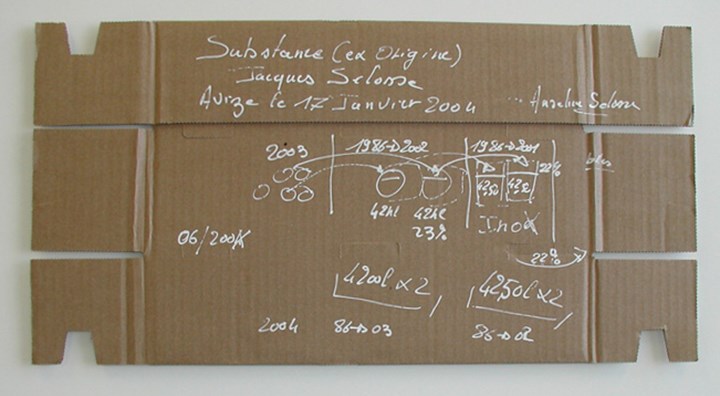 I remember the date of my first visit so well because, in response to my questions about his most famous wine, Substance, he grabbed a knock-down cardboard box and drew the most elegant schematic of the “solera” that produces it. The drawing showed how the solera has traveled over time since its start in 1986—nurturing many releases of Substance (or “Origine” as it was once called). He kindly signed and dated the drawing, fixing the date forever in my mind.

Three years later, Anselme and his wife Corinne honored The Rare Wine Co. by making us their U.S. importer. This ended a six-year period during which they had no representation in America—and the only Selosse Champagnes to be found here were a few bottles purchased by American merchants in Europe. Ironically, it was during this period that Anselme was becoming a global icon—establishing his name, and that of his father Jacques, as deserving to being spoken in the same breath with Coche and Jayer.

For our first two years as Anselme and Corinne’s importer, we only had enough wine to offer to a few of America’s best restaurants. But quantities are up slightly in this our third year, and there will finally be some for retail sale, not only through our own shop but through a few other stores around the country. Consequently, next Monday, July 27th, marks an important event—America’s first retail direct-from-the-domaine Selosse offering since 2001—in the pages of The Rare Wine Co. newsletter.

Our offering will be exciting for long-suffering Selosse lovers, as it runs the gamut from the great non-vintage Brut Initial, Version Originale, and Rosé, to the epic Substance and 1999 Brut Millesime. Though quantities available will be small, it will give at least a few lucky Americans the chance to experience Anselme’s brilliance and to learn why so many collectors around the world think he could be Europe’s finest winemaker.